Since its debut on June 8, 1984, Ghostbusters has been part of our culture zeitgeist with films, TV shows, games, toys, and much more. So, in honor of the phenomenon that is Ghostbusters and to celebrate Ghostbusters Day, let’s look at the most popular collectibles on Entertainment Earth for the past 10 years.

The Entertainment Earth Exclusive Ghostbusters Stay Puft Marshmallow Man stands 9-inches tall and features a stunning paint job with a hint of pink on his glossy, candy-like frame. From his white eyes to his red tie, the Stay Puft Marshmallow Man has been meticulously painted to stand guard over and/or bring the will of Gozer to your collection. Limited to only 1,000 pieces worldwide, this Ghostbusters Stay Puft Pink Premium Hikari Sofubi Figure comes individually numbered and packaged in a window box for easy display.

from within like someone just shut down the containment grid, this Ghostbusters Light-Up Firehouse Statue is a sensational accessory for any fan’s desk. Measuring 7-inches tall standing atop a Ghostbusters logo-adorned base, this mini-statue faithfully recreates the iconic landmark. It was limited to only 1,984 pieces.

This 1:18 scale, die-cast Hot Wheels Elite Ghostbusters II Ecto-1A Vehicle is a must for dedicated Ghostbusters fans! The Ecto-1A is an updated version of the classic Ecto-1 in the original Ghostbusters movie and is based on a 1959 Miller-Meteor Cadillac limo-style ambulance. This Ecto-1A boasts additional upgrades, such as the digital announcement boards on the vehicle’s roof, broadcasting Ghostbusters advertisements, specials, and phone number – JL5-2020 or 555-2020. The Ghostbusters logo was updated on the doors and back entrance of the ambulance, too. You know who to call.

These 7-inch scale Select action figures feature detailed sculpts and character-specific accessories so fans can reenact their favorite moments from the Ghostbusters series! The figures include approximately 16 points of articulation and a diorama piece. Collect all 12 figures to build the rooftop battle scene from the end of the film!

Winston, Ray and Louis, Series 2 of Ghostbusters Movie Select action figures features none other than Dr. Peter Venkman, Dr. Egon Spengler, and Dana Barrett as Zuul! The 7-inch scale action figure features approximately 16 points of articulation, and Peter and Egon include their proton packs as well as their wands. Plus, each figure includes a section of the rooftop temple diorama; collect all 15 figures in the line to re-create the original movie’s final scene! Each figure is packaged in display-ready Select packaging, with side panel artwork for shelf reference 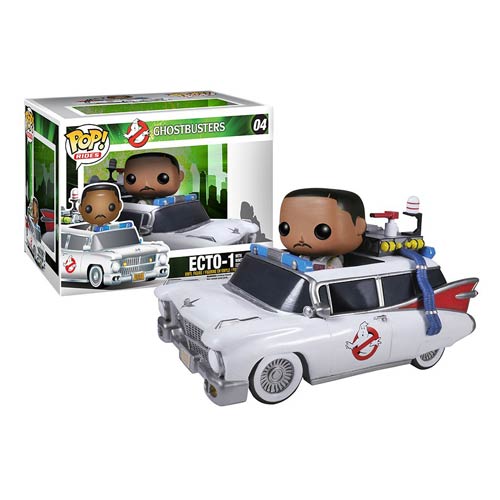 The Ghostbusters Slimer Pop! Vinyl Figure features an adorable and stylized 3 3/4-inch tall vinyl figure of the green ooze-dripping ghost with an insatiable appetite, Slimer. Fans of the fun and wacky Ghostbusters films will not want to miss out on this awesome vinyl figure! 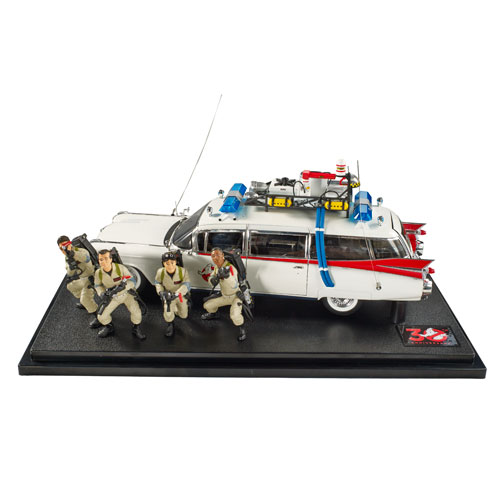 This 1:6 Scale Collectible Action Figure 5-Pack features highly detailed head sculpts with resemblances to the actors. They have accurately tailored costumes, fully articulated 1:6 scale bodies, and various realistic accessories! The action figures feature over 30 points of articulation and come complete with a wide range of extras, including multiple pairs of hands for a variety of poses and for holding the many accessories! Figures measures 12-inches tall – plus, this pack even comes with a special Slimer figure that fits in scale with the figures along with police barricade and “No Ghosts” sign light for amazing display purposes!