Celebrate 20 Years of One Piece 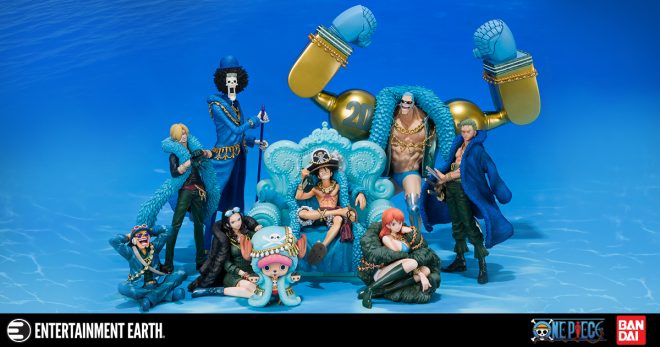 You’ll be ready to travel the Grand Line with this list of 20th Anniversary One Piece Figurarts ZERO action figure statues! Now you can build your own Straw Hat Pirate crew with all of your favorites from the globally popular anime One Piece!

This is a huge roll out that will start releasing in October 2017 but are all available for pre-order now! Starting with everyone’s favorite pirate captain, Monkey D. Luffy, we get a glimpse at the amazing details these figures showcase. This stretching swashbuckler is shown sitting atop of an oversized blue sofa. He also features two interchangeable faces. One featuring Luffy’s well known crazy smile and another winking with assurance. The detail on this statue is absolutely stunning from its paint job to its sculpt. His large dark blue overcoat almost looks plush to the touch and all of the finer accessories add some real flare. He’s even holding a bottle with a label stating, “20th,” which I think is an amazing touch!

Also out in October is everyone’s favorite navigator, Nami, and the excellent skeleton musician, Brook.

Nami‘s statue features her sitting encased within a green wrap. There is also some great detailing with a beautiful gold chain that she probably pickpocketed off of someone and has no problem showing it off here. She comes with a rather neutral smiling look and a second interchangeable face with a masterfully sculpted open-mouthed smile. The colors on her are all very striking from the deep dark green wrap that contrasts against her fair skin and bright orange hair. Overall she’s a gem that any crew would be lost without.

Brook has to be one of my favorite pieces in this lineup so far. The pose he has been sculpted in feels very lifelike even for a skeleton. He’s featured wearing a long blue coat littered in gold treasure pieces with a blue bowler hat that barely fits over his massive curly afro. He’s standing in a really prominent pose holding a blue cane almost as if he was ready to walk away with some style. His two faces feature his mouth wide open no doubt in belting out some melody with glasses above his hollow eyes and one with super cool heart shaped sunglasses. This statue truly captures the spirit of the musician every crew needs to keep their spirits up.

Coming out starting in November of 2017 are Roronoa Zoro, Franky, and little Tony Tony Chopper.

The first crewman in the Straw Hat Pirates comes to life with this really strong statue of Roronoa Zoro. His stance shows him reaching for one of his three swords and a face that is unforgiving. That all changes when you change out his face with the smiling version but it’s almost unsettling to think he will cut you down no matter what mood he’s in. His long blue overcoat almost looks like its flaring out in motion. Be careful taking your eyes off of this pirate because he’s definitely no pushover.

Next is the larger than life cola-powered cyborg, Franky. This is such a fun statue really bringing to life the over the top personality we all have grown fond of over the years. From behind you can see some great detailing on his jacket of the words One Piece above the Straw Hat Pirates’ crest. He’s ready to beat anyone down with hugely oversized mechanical arms showing off some seriously big guns. There’s another really great touch of detail for all to see on those arms showcasing, “20,” on his right bicep and, “th,” on his left. He’s a true testament that just being alive isn’t a sin!

Speaking of don’t care attitude, we have Tony Tony Chopper! While he may be tiny this statue is truly larger than life. This blue-nosed reindeer has a real gangsta feel. His hooves are being held up for everyone to see and with either face, this piece just doesn’t give a hoof. Being so small in stature he’s almost completely covered in his blue overcoat and oversized treasure, but he does make a huge impression. I really feel they captured the lighthearted nature of this little hybrid.

Last but not least finally to complete your collection in January of 2018 we have Sanji, Nico Robin, and Usopp.

You’ll be happy to see the heartthrob cook, Sanji, protecting his hands in this really stunning statue. This bad boy’s stance has a great vibe with one of his interchangeable faces looking at you with one eye covered by his stylish blonde hair with a cigarette in his mouth. His other face brings to life that confident and caring attitude that never lets a person go without a good meal in their belly. If you are crushing on this guy like me you definitely don’t want to miss out on adding him to your crew.

Nico Robin‘s statue is one of the most subtle of this entire lot of statues. It kind of plays up to her character and the sacrifices she’s made to be a part of this crew. She’s featured in a seated position with her hands on her lap. While she doesn’t come with an interchangeable face you can remove her fur coat to get a little more of a focus on that intent stare she is giving off. There’s a real sense of humbleness to this figure that actually kind of balances out the rest of the crew. 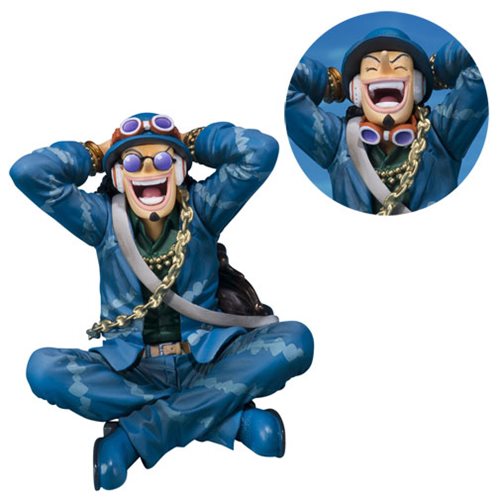 Finally, there is an awesome statue of Usopp. There’s a real playful sense when you look at this figure. He’s shown with a wide mouth laugh as if he was just finishing up one of his tall tells. His goggles can be removed to show off an even more jovial expression emphasized by his hand behind his head. When seen from behind you get a glimpse of his huge bag most likely filled with treasure. This sniper will spot you a mile away so be careful when you take a peek.

There you have it! All nine of the core Straw Hat Pirates available for pre-order by Figurarts ZERO in celebration of 20 years of adventures! It is a huge testament to see all of these characters as a set and each individually represented to show off the characters we have all grown to love over the years. When you put this crew together you truly will be getting something great that will be inspiring to any embarking on their own adventures!

Which crew member is your favorite? Let us know in the comments.