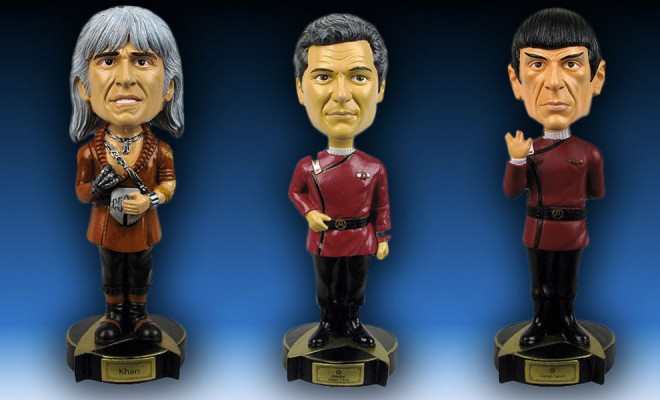 These phenomenal bobble heads stand about 7 inches tall, including themed base. Each is crafted from resin and bears a remarkable likeness to the character’s actor. They look sensational when all heads wobble in unison.

One of the largest cult phenomena of our time, Star Trek is a science-fiction entertainment franchise based on a fictional universe created by Gene Roddenberry. It includes a multitude of television series, movies, video and computer games, novels, and more depicting an optimistic future in which mankind has risen above past frailties and vices to unite with other intelligent species in the galaxy to explore the cosmos, discover new worlds, and encounter new civilizations – “To boldly go where no one has gone before!” 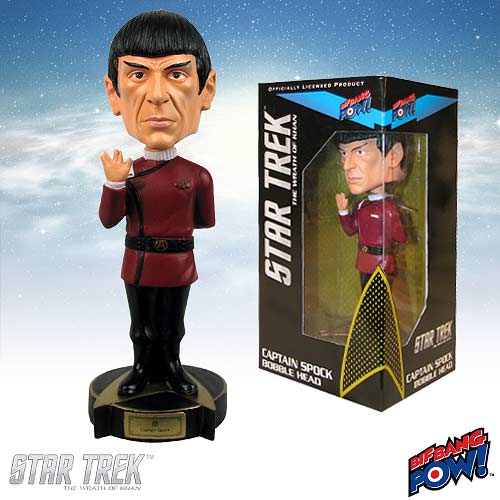 Captain Spock is in his spiffy red Starfleet uniform with black pants and boots, fingers parted in the traditional Vulcan salute, wishing you his iconic “live long and prosper.” The Captain Spock Bobble Head bears a remarkable likeness to Leonard Nimoy.

The Wrath of Khan Khan Bobble Head presents James T. Kirk’s long-time enemy, Khan Noonien Singh, just as you remember him. . . glove and all! He features an incredible likeness to actor Ricardo Montalbon.

Get your Star Trek Wrath of Khan Sulu Bobble Head right here! In 7-inch scale on a delta-themed base, it’s fashioned of resin and presents the U.S.S. Enterprise’s resident sword collector just as you remember him. The Sulu Bobble Head bears a wonderful likeness to George Takei.

The Wrath of Khan Kirk Bobble Head presents Commander Chekov in his spiffy red Starfleet uniform with black pants and boots, including the themed base with his name and rank on the front. The Chekhov Bobble Head bears an incredible likeness to Walter Koenig.

The Wrath of Khan Scotty Bobble Head presents the U.S.S. Enterprise‘s chief engineer just as you remember him, mustache and all. He’ll keep everything ship shape. Well, he’ll bobble at least. The Scotty Bobble Head features a remarkable likeness to James Doohan.