Is The Flash’s Latest Casting Announcement a Hint for Good Vibes to Come?

Yesterday we reported that The Flash cast Peyton List as Lisa Snart, but that’s not the only sibling coming to the show!

In the 16th episode of the show, we will see both Lisa Snart and now Cisco’s older brother Dante Ramon, played by Nicholas Gonzalez (Sleepy Hollow). The character is described as Cisco’s “handsome and charming older brother, who is used to being the family favorite.” We already adore Cisco on the show, so we’re excited to see another Ramon and we hope we’ll like him just as much!

Dante is a very young character in the comics, first premiering in 2013′s Justice League of America’s Vibe #1. The show will have a lot of freedom with his character, but his inclusion definitely makes us wonder about Cisco himself.

This show, along with Arrow, definitely takes creative liberties with comic lore. However, we have to wonder if we’ll be seeing Vibe – Cisco’s superhero identity – at any point. 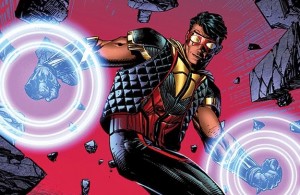 Indeed, the comic version of Cisco is a metahuman with the ability to create shock waves of incredible strength. The show has already changed Cisco’s backstory (previously named Francisco and nicknamed “Paco” in the comics) and we’ve seen no signs of his turning into a metahuman from the explosion. That hardly means anything on a show like this, though.

The show has a lot of potential and we can only hope it will continue doing well moving forward. The writers have given us a lot of The Flash mythology already so hopefully, they can rest easy knowing that they will likely be renewed for a second season. We’d still love to see Vibe one day, or maybe even Caitlin Snow’s Killer Frost.

The Flash returns on January 20th, 2015, with the episode “Revenge of the Rogues”.

What do you think about the show bringing in Dante Ramon? Do you want to see Vibe or Killer Frost one day? Let us know in the comments!