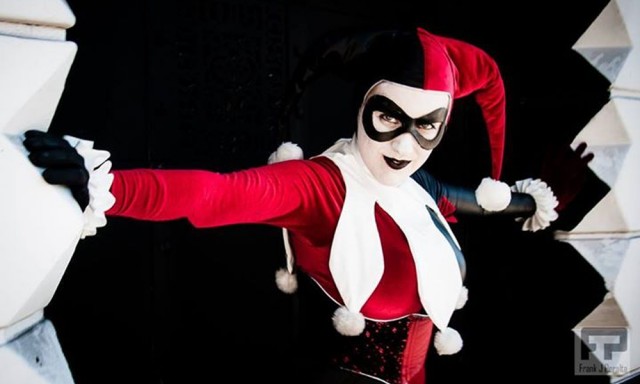 Angi Viper refers to herself as a “cosplayer, performer, singer, nerd, and kid at heart” and she absolutely is all of those things. From her immaculate transformations in costume to her stellar vocal performances, Angi is the kind of cosplayer you want to be your best friend. She’s kind to everyone she meets and shares her vibrant love of costuming (as well as the fandoms) with all those around her.

Angi prides herself on being a chameleon. If you can’t recognize her from one character to the next, she’s done her job. Whether it’s Queen Elsa or Madame Hydra, Angi Viper truly embodies each of her favorite characters. She is an amazing artist, seamstress, prop maker, wig stylist, make-up stylist, mold maker, singer, and so much more. Find her on Facebook, Twitter, and Instagram.

I’ve had the wonderful opportunity to talk to her and see her transform into her characters. She is an inspiration to me and I was honored that she shared a little bit about her life as a cosplayer with Entertainment Earth.

1. What does cosplay mean to you?

Cosplay is an exploration of yourself through a connection to a particular series or character. It’s a way to find yourself through creativity, social interaction and research. When I cosplay, I select characters I have a strong bond to and see something of myself in. I explore that connection by researching the character, recreating their look and performing as them in costume.

I’ve learned more about myself through cosplay than any other hobby I’ve ever dabbled in. It’s also brought me out of my shell and improved my social skills through interaction with fellow cosplayers, convention guests and followers online and in person at events.

2. Why do you cosplay? What inspires you?

I cosplay because nothing makes me happier. I’ve never felt anything like the sense of accomplishment and fulfillment when I finally see myself in a cosplay I’ve been working hard on. It’s indescribable looking in a mirror and seeing your favorite character – someone who truly inspires you – staring back. Every character I cosplay is someone I aspire to be like and becoming them through cosplay allows me to find myself in them and vice versa, finding their strength and adding it to my own. I find a little bit more about myself with each new character and carry those experiences with me out into the everyday world, becoming a stronger, more confident person.

3. How long have you been cosplaying and how did you get into it? What was your first costume and why did you choose it?

I’ve been cosplaying on and off for about 14 years. I started in high school because I was a huge anime fan and that community introduced me to the idea of cosplay. My first was Cardcaptor Sakura when I was 14 because she was my favorite character from my favorite series and I wanted to be her more than anything else in the whole world. My mom made the costume for me for Halloween and it was the greatest day of my life. I felt invincible, like I really could be the cardcaptor and I wanted to feel that way forever. I cosplayed a few more times in junior high and high school, took a hiatus in college and picked it back up actively in 2011.

4. Which of your costumes are you most proud of and which is the most enjoyable to wear?

I’ve created something like 40 costumes at this point and I’m prouder of each than the last. Each new project is an opportunity to improve my skills and do things better.

If I had to pick one, I’d say I’m proudest of my Frozen Fever Elsa cosplay and my Princess Daphne wig. Both were challenges because I had a very specific look that had to be achieved and they came out even better than I envisioned.

As for most enjoyable to wear, it’s a tie between Madame Hydra and snow queen Elsa. Both are costumes I’m extremely proud of. They’re both very comfortable to wear and characters I connect very strongly with so getting into character is very natural. They also both get very positive feedback and invite a lot of fun interaction with convention-goers, plus I especially love interacting with kids as Elsa!

5. Do you make your own costumes or does someone make them for you? How do you put everything together?

I make all my own costumes with the exception of most shoes and a few mass-produced items. For example, Cassie Hack was entirely store-bought items (though I did alter the fishnet bodysuit). I could have made the costume, but it was a last-minute decision to put the costume together and the pieces were so easily procured that it just seemed silly to go through the trouble of making a pleated skirt.

When I first started cosplaying all my costumes were made that way. I went to thrift stores and found items that looked similar and altered them where needed to get the look of a character.

These days, though, I’ve found I love to sew and have so much more control over the final outcome of a costume when I make it from scratch that I generally make everything from beginning to end myself including wigs.

I try to make all my accessories myself but there are some cases where I just don’t have the time to figure out how to make something as well as a vendor so I’ll commission small pieces. For example when I was making Sailor Saturn, I made the entire costume and styled the wig but at the time I was so overwhelmed by my first ever sailor suit I didn’t have the energy to figure out the tiara so I bought one off Etsy.

6. What inspires you when you’re working on your costumes?

The excitement of bringing a character to life inspires me to keep going. I love cosplay more than anything else I’ve ever done and I make sacrifices for that happiness. I don’t go out with friends or to the movies or take vacations because every free moment is dedicated to completing costumes and I honestly wouldn’t want my life any other way. I feel more fulfilled, passionate and enthusiastic when working on costumes than when I take time away from my hobby to focus on other things.

My favorite in-costume convention moment will always be WonderCon 2014 where I met a little girl name Tempy. I was dressed as Elsa on the last day of the con and, as I was leaving at the end of the day, I bumped into a mom who immediately turned her daughter around to face me.

Tempy’s face lit up like Christmas morning as she informed me that she’d been looking for me the whole day. She walked right up and gave me warm hugs and we took a photo together.

As she was leaving, an Anna cosplayer walked up and Tempy insisted on a second photo with both of us at which point she plopped down next to me and insisted that she was going to live there with me forever.

I will never forget that day or Tempy and I think about it every time I run into a snag or need a reminder why I love what I do so much.

8. What are you working on now and who are you planning for the future?

WonderCon and CTN Animation Road Trip just passed, which were two big events for me. And I’m already hard at work on 3 big groups I’ll be debuting at Anime Expo later this year. I’m really excited because everything is characters that I’ve been dreaming of cosplaying since I was young and I can’t wait to bring those dreams to life.

9. If time and money were no issue, what dream costume would you love to make?

I don’t like to reveal dream costumes because I’d hate to get my (or anyone else’s) hopes up. I do have a number of costumes I’ve been dreaming of that are just out of my budget right now but hopefully my Patreon will help see some of those costumes become a reality soon.

10. Do you have any tips or tricks for improving your skills? Any advice for aspiring cosplayers?

Don’t give up. That’s really the best advice I can give to anyone on anything they’re really passionate about. The more you practice and push yourself to try new things the better you’ll get and the more you’ll learn. You probably won’t be very good at the beginning but if you really want to get better just keep trying. Ask questions, look up tutorials, don’t be afraid to fail or start over. If it’s something you’re passionate about it’ll all be worth it in the end.

The best advice I can give any aspiring cosplayer is to do what makes you happy. Don’t allow yourself to fall into the trap of cosplaying what others want you to – be it friends or the internet or what you think will get you more followers. Eventually it’ll come around to bite you in the ass when you realize how unhappy you are. Cosplay is about YOU first and foremost and if you aren’t doing it for you, you’ve already failed.

Each photo belongs to the original photographer, as credited in the description.