The Trip of a Lifetime Requires 1:6 Scale Doctor Who Statues and Figures 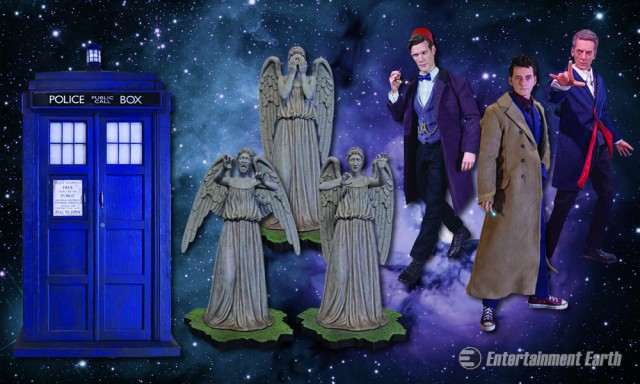 When you’re traveling through time and space, the adventures are big – so your collection should be too! With BIG Chief Studios’ Doctor Who 1:6 scale action figures and statues, that’s exactly what you’ll be getting.

With incredible detail and likeness to the actors, it’ll be like having a perfect-sized Doctor companion for your desk. Each figure has multiple points of articulation and character-specific accessories like the 1st Doctor’s pipe, the 10th Doctor’s 3D glasses, the 11th Doctor’s Magnograb Remote (aka the Big Friendly Button), and the 12th Doctor’s Sonic Screwdriver.

The cloth costumes show the 10th Doctor in his blue suit with brown trench coat and the 11th Doctor with his popular red fez.

Of course, the Doctor would be nothing without his TARDIS! Standing for Time and Relative Dimension in Space, BIG Chief Studios had access to actual shooting props to make some of the most detailed and accurate replicas of the 10th and 11th Doctors’ time machines.

Measuring 20-inches tall, these blue police boxes are not actually bigger on the inside but they do have an internal illumination system and season-specific control room backdrops.

Last but not least, when you’re adventuring through time and space, you’re bound to run into some less than friendly faces. One of the Doctor’s most iconic adversaries are the Weeping Angels. With the ability to sneak up on you and send you back in time, they are truly frightening.

Made of polystone, the statue measures 12-inches tall and comes with interchangeable arms and heads.

So are you ready for the trip of a lifetime? Then get these great figures, currently available for pre-order at Entertainment Earth with free shipping. The Doctors and Weeping Angels are scheduled to arrive in November 2015 and the two TARDIS statues in January 2016.