Get Ready for Bloody Good Fun with Exclusive Shaun of the Dead Pop! Vinyls 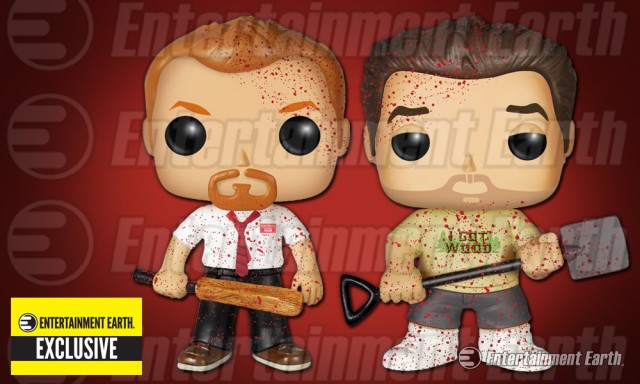 If there’s one thing we know about the zombie apocalypse, it’s that it’s going to be messy. Why not make it an enjoyable mess with our Shaun of the Dead Shaun and Ed Bloody Pop! Vinyl Figures – Entertainment Earth Exclusives from Funko?

The combination of Edgar Wright, Simon Pegg, and Nick Frost are guaranteed to make for a good time – this time it just happens to be bloody too, which is exactly what these vinyl figures are.

Become a hero yourself and face an army of the undead with these highly stylized and exclusive 3 3/4-inch Pop! Vinyls.

Based on the likenesses of Pegg and Frost, these figures show best friends Shaun (Pegg) and Ed (Frost) just as they appear in the film. Shaun wears his work uniform, complete with red tie, and Ed looks more casual, but both are covered in blood spatter.

One of the most important aspects in a zombie apocalypse? Your weapon. Shaun carries a cricket bat and Ed carries a shovel, both also appropriately covered in red.

Each figure comes packaged in a window display box and are exclusively available for pre-order at Entertainment Earth with an expected arrival date of December 2015.

» See All Shaun of the Dead Collectibles