Top 10 Action Figures from Bif Bang Pow! for the Holidays

Action figures… you just GOTTA love them! At least, we do! Action figures have the unique ability to bring your most beloved characters to life, and (most importantly) bring some fun into your day.

That’s why we’ve hand-selected some of our most popular action figures from a wide-range of iconic characters that make perfect gifts, creating our list of Top 10 Action Figures from Bif Bang Pow! for the holidays.

They are all in stock at EntertainmentEarth.com now, and the best part… for one day only (November 10), you can save an additional 20%! Plus, receive FREE SHIPPING when you order $79 or more of these select items at Entertainment Earth.

We know you are eager to see what we’ve selected. So let’s start our countdown!

Whether it’s on Earth or the vast reaches of space, there is only one man (and Pigeon) who can solve the mysteries of the Universe. This 8-inch retro Mego style figure features the champ in a vintage all-fabric spacesuit and plastic astronaut helmet inspired by the outfit worn by Mike Tyson’s alter-ego on Mike Tyson Mysteries. This figure sports the infamous facial tattoo and has multiple points of articulation. Also included is Mike’s trusty associate, Pigeon!

The beautiful waitress and aspiring actress joins the crew of the U.S.S. Enterprise! Standing about 8-inches tall in her episode-specific inspired red fabric Operations uniform and in a retro style that harkens back to the bestselling Mego action figures of the 1970s and 1980s, Penny is dressed as a Star Trek: The Original Series Ops 8-Inch Action Figure and features multiple points of articulation along with belt, phaser, communicator, and tricorder accessories! Other figures sold separately.

Ethan Chandler, the brash American gunslinger, undergoes a powerful change when the moon is full. Now collectors can grab him before he turns once more. The meticulously detailed figure showcases Ethan in an extra-long gray trench coat made of soft and bendable PVC plastic. The rest of Ethan Chandler’s outfit consists of a brown shirt with gold chain and dark gray pants. This first ever 6-inch figure of the popular Penny Dreadful character features an amazing 18 points of articulation and includes Ethan’s signature gun holster, guns and removable bowl hat.

Every year, Henry Corwin takes a job as the department store Santa. But this year will be a little different, as Henry will soon find himself part of the magic and wonder that is Christmas! This limited edition action figure from Bif Bang Pow! features a detailed color figure of Santa Claus from Season 2, Episode 11 “The Night of the Meek” of The Twilight Zone. Individually carded and numbered, the figure measures approximately 3 3/4-inches tall and is made from plastic. Based on the retro design of action figures from the 70s, it features five points of articulation: neck, shoulders, and hips.

Money, beauty, and eternal youth. Dorian Gray truly is a triple threat kind of guy that has it all. This expertly detailed figure showcases the reckless risk-taker in a sophisticated black tailcoat suit made of soft and bendable PVC plastic. The rest of Dorian Gray’s ensemble is completed by a white button shirt and a striped magenta vest. This first ever 6-inch figure of the popular Penny Dreadful character features a whopping 18 points of articulation and includes Dorian’s signature goblet as an accessory.

In his first ever action figure, the former comic book owner is sporting his sweater jacket and button down plaid shirt combo. It’s all tied nicely together with his blue jeans and not-so matching blue shoes. His theoretical physicist pal is dressed in a red alternate mathematical equation T-shirt and rounds out the look with tan pants and brown shoes. Their apparel is inspired by outfits worn by both characters from actual episodes of the series! Both figures feature 5 points of articulation at the neck, shoulders and hips. As an added bonus, the individually numbered packaging includes a fold-out diorama similar to Stuart’s comic book shop (pre getting burnt to a crisp). Limited to just 2400 sets.

Oh no Evil Emperor Ming is out to destroy Earth but, not to fear. Flash is here to save us all… in 3 3/4-inch scale that is! Recreate the memorable Hawk City scene from the 1980 film Flash Gordon, with the Flash Gordon™ and Ming the Merciless™ 3 3/4-inch scale action figures. Each figure has 9 points of articulation and comes with its own sword accessory. But that’s not all. Flash and Ming come in unique full-color packaging that comes with a fold out diorama of Hawk City. Pose your figures to recreate the popular scene from the film!

As seductive as she is formidable, Vanessa Ives is a complex mixture of mystery and supernatural mojo. The intricately detailed figure showcases the beautiful clairvoyant in a an ankle long black skirt with a checker square pattern along with a matching maroon vintage Victorian coat which is made of soft and bendable PVC plastic. The rest of Vanessa’s wardrobe is completed by a black turtleneck-esque undergarment. This first ever 6-inch figure of the popular Penny Dreadful character features a whopping 18 points of articulation and includes Vanessa’s trusty set of tarot cards fanned out into one piece along with a separate single card.

Everyone knows the most entertaining news comes from Saturday Night Live, and now Bif Bang Pow! is bringing back by popular demand the hosts from television’s funniest news broadcast in action figure form! Collectors get detailed likenesses of both Tina Fey and Amy Poehler in this 3 1/2-inch action figure set, professionally dressed and ready to deliver the news with the included fold out diorama of the iconic “Weekend Update” news desk. If you missed the first release, be sure to order this new release now because it won’t stay in the headlines for long! 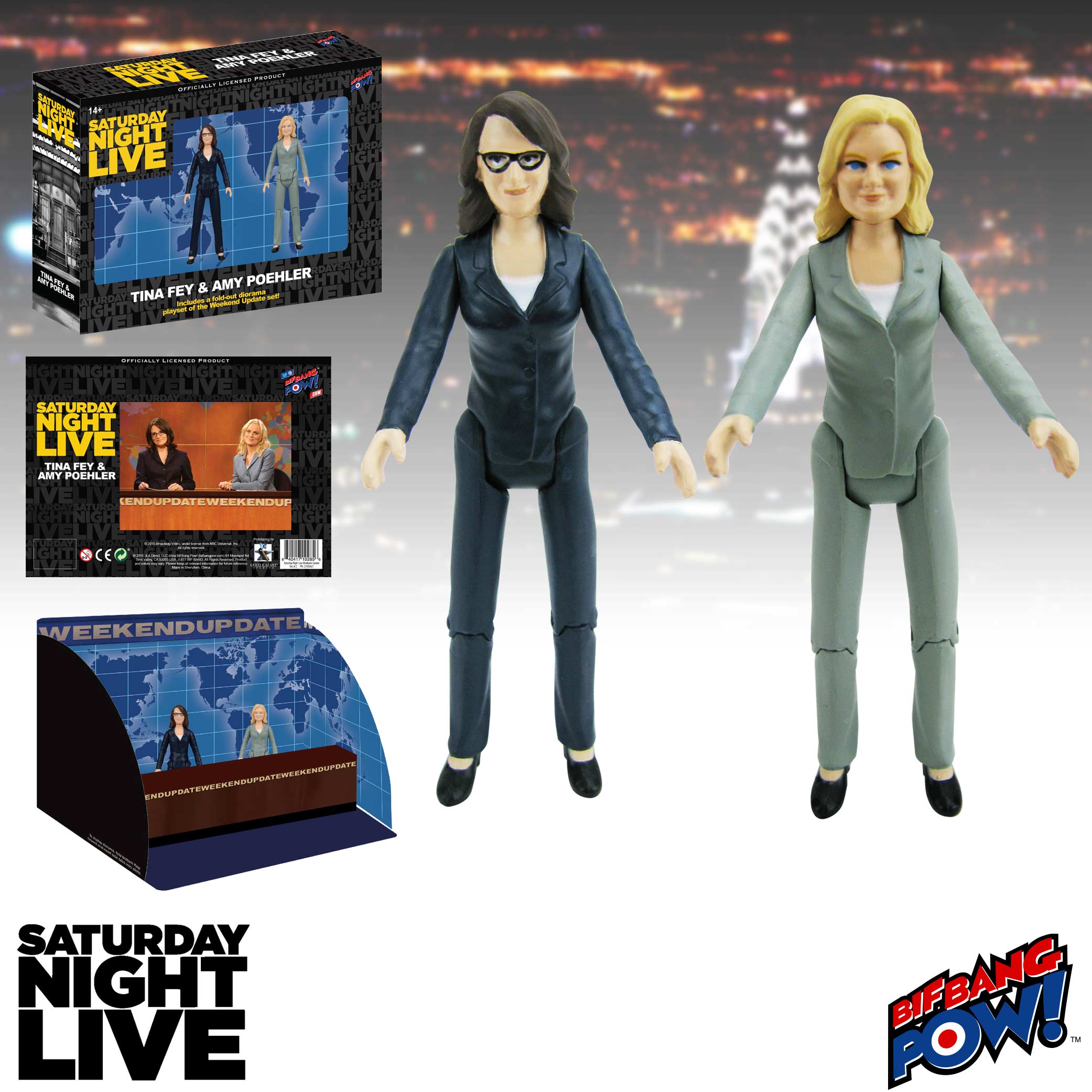