SUPERMAN™, BATMAN™, and WONDER WOMAN™ Chair Capes to the Rescue 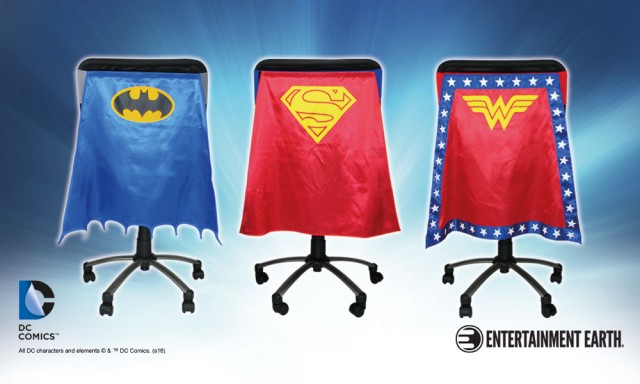 We have an important question for you: SUPERMAN™, BATMAN™, or WONDER WOMAN™?

Luckily, you can show where your alliances lie with DC Comics Chair Capes!

With the Superman Classic Chair Cape, you put your weight behind the MAN OF STEEL™, the hero of Krypton who stands for truth, justice, and the American way.

He believes in hope and doing what’s right, no matter how hard it may be. After losing his planet and his people, he joins the human race and begins to fight for and defend them.

He is the salvation of GOTHAM CITY™, and the DARK KNIGHT™.

BATMAN™ looks to protect GOTHAM CITY™ from the many Super-Villains that ravage its streets, prowling the rooftops as the city’s watchful protector. Without the aid of superpowers, BATMAN™ has risen from the ground (and Wayne Enterprise’s heaps of money, of course) to become one of the foremost heroes of the world and the JUSTICE LEAGUE™.

If you choose the Batman Classic Chair Cape – Convention Exclusive, you’ll be choosing the life of a heroic, tough vigilante.

Last, but certainly not least, is the Amazon princess herself: WONDER WOMAN™.

Blessed not only with incredible strength and skill, Diana also possesses far more important traits, such as compassion, determination, and justice. She will never allow for bullying or unfairness in life.

The Wonder Woman Chair Cape represents everything she stands for and really, how can you go wrong with that?

So let your voice be heard and vote below for the hero’s cape you stand behind!