Now there are even more Disney and Pixar cuties to carry with you wherever you go! Monogram have added three new sets to their foam keychain range: Disney•Pixar Series 6, Big Hero 6, and Disney Tsum Tsums!

The first set is an assortment of Disney•Pixar characters. All five of Riley’s emotions from last year’s smash hit Inside Out are available, along with imaginary friend Bing-Bong. Joining them are Jessie, Rex, and Lotso from Toy Story! There are also two special variants of both Bing-Bong and Anger.

The second set is all Big Hero 6 characters, with each of the six heroes present in armor. The set also includes Hiro in his street clothes, Baymax without his armor, the villain Yokai, and the adorable kitty Mochi. There is also a variant Baymax in his green prototype armor!

Finally, the last set is all the rage right now: Tsum Tsums. There are adorable, round figures of Minnie Mouse, Alice Liddell, the Mad Hatter, Winnie the Pooh, Tigger, Pinocchio, Marie, Pluto, Dumbo, and more!

These keychains are packaged blind box and you will receive an assortment of six, so you may receive duplicates. On the other hand, if you can talk your friends into collecting them too, there’s bound to be trading opportunities! They’re in stock now, and you can head over to Entertainment Earth to place your order. 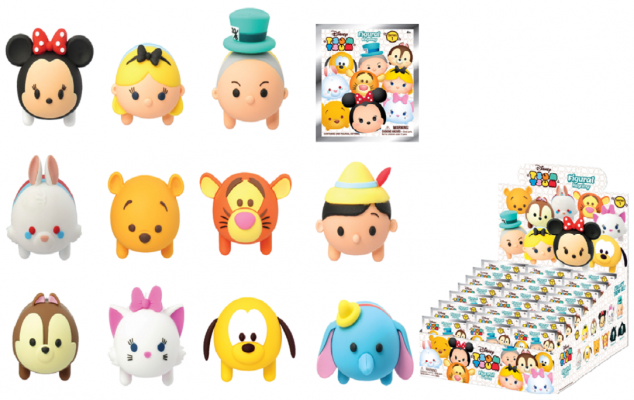