Embrace the Zombie Lifestyle with These Undead Accoutrements 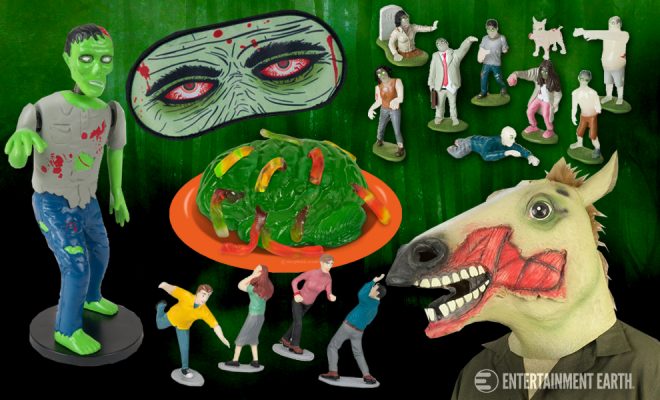 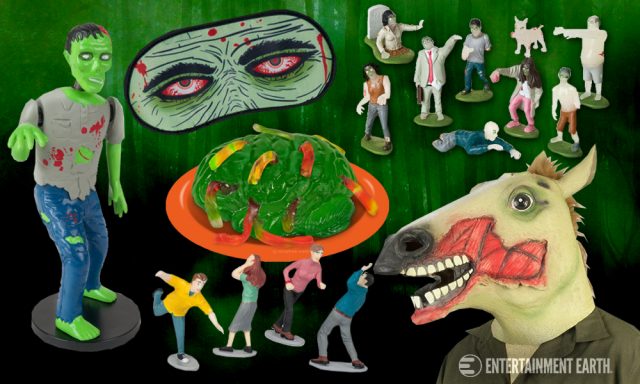 The knowledge of your own mortality can be daunting and depressing; but for those of us eagerly anticipating the zompocalypse, there’s always hope of life after death. In a fashion, anyway…

And while zombies have gotten a bad rap in cinema – ever since they turned cannibal in George A. Romero’s groundbreaking film Night of the Living Dead back in 1969 – and the rotting flesh and cravings for braaaaaains make them difficult houseguests to manage, I personally believe zombies can be oodles of fun.

And Accoutrements clearly agrees with me, because they have an amusing, freaky line of products just for us Deadheads.

The Dashboard Zombie makes a great traveling buddy – and I can speak from my own experience! With his spring-loaded neck and arms for maximum wiggling and lurching, he’ll be endlessly entertaining on the grueling road trip north to the relative safety of chilly Canada when his undead brethren arise. He’s 5 1/2-inches tall and has an adhesive base that grips firmly to any dashboard or console, so there’s no need to worry about him ripping loose and lunging for your carotid mid-drive.

The Zombie Brain Gelatin Mold will make you the party host(ess) with the most(est). Perfect for those horror marathons and pre-release parties when the next Resident Evil film inevitably opens, you can throw in some gummy worms or jammy blood for that extra special touch (a Worm Infested Zombie Brain recipe is even included!). The mold produces a 7 1/2 x 6 1/2-inch brain, which is just the right size for a ravenous zombie or two.

Fighting the hungry hordes can be tiring work, and sometimes you have to snatch your Zzz’s in-between melees with the zed-words. This Zombie Eyes Polyester Sleep Mask is not only fashionable but useful, blocking out light for those times when daytime cat naps are necessary. Made from polyester with a cotton back and elastic band, it fits most heads.

The horse mask phenomenon remains good, silly fun in Vines, pranks, and flash mobs alike, but why not switch it up a bit with the Zombie Horse Glow-in-the-Dark Mask? Further proof that anything is more fun when zombified, this latex mask will have you looking like a mutated monstrosity that dragged itself from the glue factory in search of brains. This could even lead to a new spin-off: The Galloping Dead. Fits most adult heads and features a realistic fur mane. 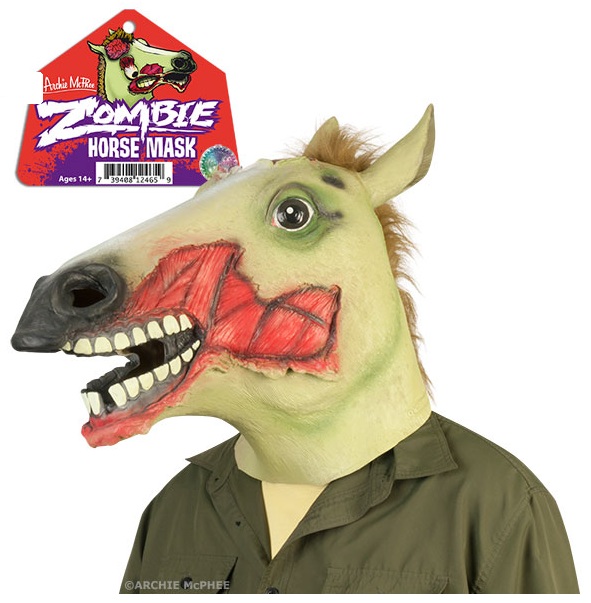 We simply can’t forget the kiddies – it’s never too soon to become a zombophile! The Flesh Eating Zombie Figure Set features nine hard vinyl figures that range from 1 to 3 1/4-inches tall. The mob of decomposing neighbors includes dudes, ladies, and even one of man’s best friend – no longer quite friendly but still willing to play fetch, so long as it’s with an arm. Some are clawing or crawling their way out of fresh graves, staggering along with poor coordination thanks to a rotted cerebellum, or are reaching out to give you the sort of hug that will last a lifetime. And be sure to turn off the lights when you’re done, because these undead friends glow in the dark!

And since zombies can be somewhat lackluster conversationalists, you should probably get the Horrified Movie Victims Vinyl Mini-Figure Box Set, too. These terrified townsfolk will be perfect for dioramas with the zombie figures, giving your undead friends someone to chase and gnaw on. These unfortunate souls are 3-inches tall and posed in a way that makes it clear the world is ending around them.

Almost everything is available now – or coming very, very soon – so order today before triple-checking your Go Bag and re-plotting your zompocalypse escape plan.