R2-D2 and C-3PO Figures Are Full of Action 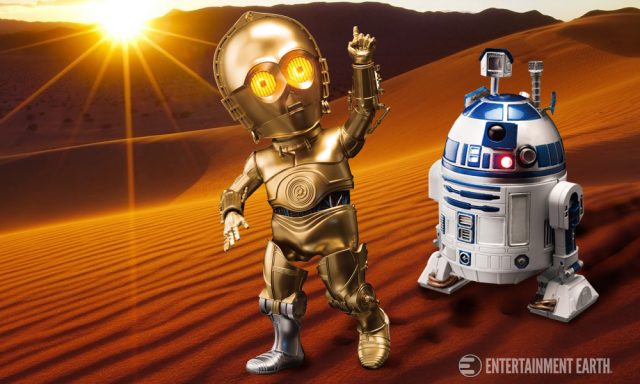 The Star Wars saga can’t be told without the help of two humble droids. R2-D2 and C-3PO are the heart of the Star Wars galaxy. The two contrasting machines witness all the action of the original six films, and it is mainly through their eyes that we see the characters and conflicts. Arguably, they are the most important non-human movie characters since King Kong.

Beast Kingdom brings us these Star Wars: Episode V – The Empire Strikes Back R2-D2 and C-3PO Egg Attack action figures. These figures are not only fun, but they are loaded with extras for tons of opportunities for action.

RD-D2 has an amazingly detailed exterior. His blue and white outer armor is textured to be a perfect match for his movie likeness. But what is really going to get you is what’s inside! R2 comes with three extending arms, one extending life scanner, and an extending periscope. But what’s best of all is that he comes with a built-in Princess Leia projection function! Yes, he actually projects the likeness of Leia, calling for help from her father’s old mentor.

And who needs a red arm when you can have a silver leg? The Star Wars C-3PO Egg Attack action figure looks exactly like he did in Episode V. His golden and silver colors look exactly like he did in everyone’s favorite Star Wars movie. Not only that, but he can burst apart, just like he does in Cloud City. With a special hinge design, he can be scattered into six pieces (part-carrying wookie not included).

These new Egg Attack Star Wars figures are fun and exciting. Make them part of your collection today. You can pre-order them individually, or as part of a discounted 2-Pack at Entertainment Earth!