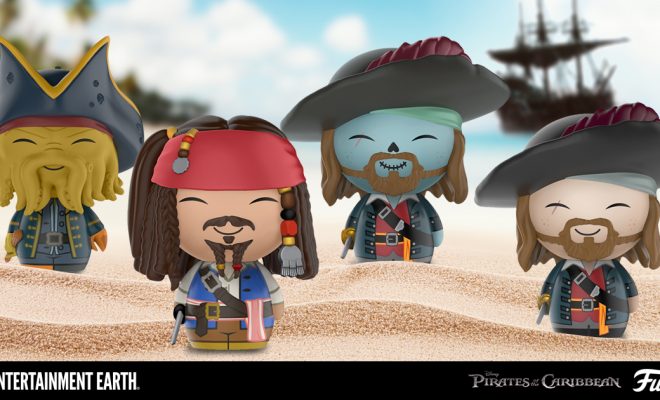 Pirates have enough to worry about with scurvy and all that. Though, I suppose one could get a toothache with how precious this new line of Dorbz is. Can wooden teeth hurt? Asking for a scallywag.

The wonderful thing about a pirate is you never know who you can trust, but you can always trust them to be dishonest. Savvy? The Black Pearl has gone from captain to captain, often traded off between Captain Jack Sparrow and Captain Barbosa. It really depends on whose turn it is to mutiny that week. While you can sort out Jack’s motives – sometimes – Barbosa’s a bit more… Changeable. Dorbz planned for that and gave you two options for this swashbuckler!

Where Jack and Barbosa are every now and then playing for the same team, Davy Jones is much more solidly on team “Give Me Your Soul.” His unyielding alignment makes him a bit easier to understand, so long as you ignore that enslaving souls bit. Like most baddies, Davy Jones’ heart be broken. Or rather, Davy Jones’ heart be ripped out of his chest because emotions are hard, and honestly who doesn’t wish that was an option from time to time?

Then there’s the man of the hour. The one and only – Jack Sparrow. He may be the worst pirate you’ve ever heard of, but you have heard of him, and he won’t ever let you forget that. I’m sure he’s also very upset I left captain off in the second sentence, but what does he know?

Pre-order these Pirates of the Caribbean Dorbz and stumble your way through your favorite port with this cute little bugger in your pocket!

Collectibles Vinyl Figures
Related ItemsCaptain BarbosaDavy JonesDorbzFunkoJack SparrowPirates of the CaribbeanVinyl Figure
← Previous Story These Funko Pop! Vinyls Are Weird, but We Like Them
Next Story → Most Triumphant! Bill & Ted Have an Excellent Adventure as New Pop! Figures