The 1990s Teenage Mutant Ninja Turtle movie was a landmark in the world of comic book to film adaptations. In the dawn of CGI film effects, the filmmakers relied on stunning costuming made by Jim Henson’s Creature Workshop to bring the Heroes on a Half Shell to life. The same team that helped to make Yoda and Jabba the Hutt film legends were challenged with creating turtle costumes that were authentic, expressive, and agile enough for martial arts actors. They did not disappoint.

Now you can remember this amazing feet of filmmaking with the Teenage Mutant Ninja Turtles Movie Raphael and Teenage Mutant Ninja Turtles Movie Donatello 1:4 Scale Action Figures from NECA. These outstanding figures stand over 16-inches high and have an amazing 30 points of articulation. Accurate to the details from the film that originally brought the Turtles to life on the big screen, these figures have interchangeable weapons and hands. These figures are so authentic, that Raphael even comes with a slice of pizza.

The design of the characters for the film had each turtle individualized with coloring and skin detail. All of these nuances are reflected in the details of these amazing figures. Their expressions and gear are so crisp and inviting that you’ll swear you’re looking at a miniature used in the movie! Figures like this don’t come along every day, and they aren’t cheap, but if you’re a serious collector or a serious fan of the Teenage Mutant Ninja Turtles, you won’t want to be caught out of the sewers without these figures. Head over to Entertainment Earth to pre-order yours today! 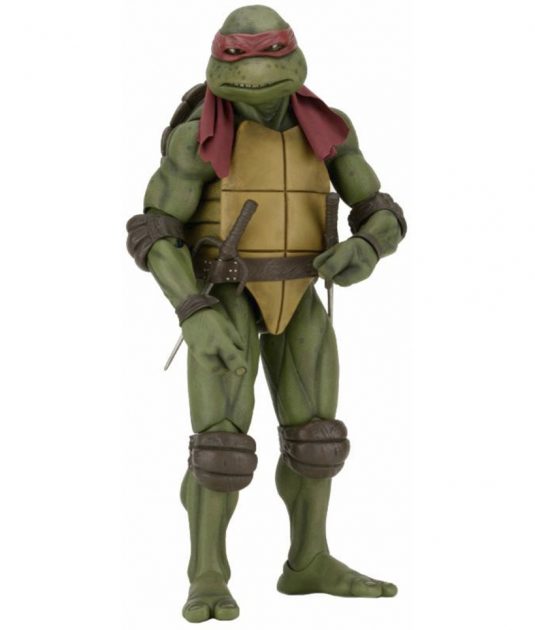 Action Figures Collectibles
Related ItemsAction FiguresMovieNECANinja TurtlesTeenage Mutant Ninja Turtles
← Previous Story The Thoughtful Holiday Gift for the Collector in Your Life
Next Story → Batman Reimagined as a Robot Comes to Life as an Action Figure!