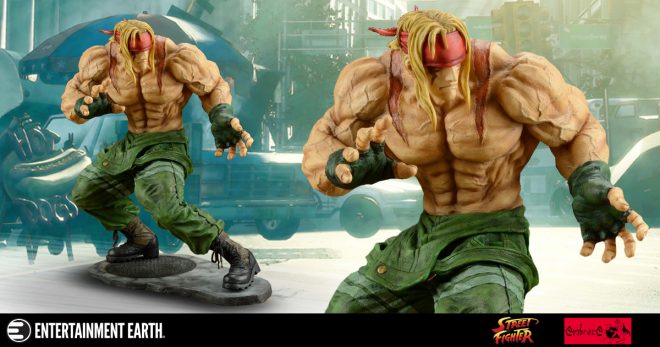 Commanding attention since 1987, Street Fighter is the undisputed champion of the fighting video game genre. While Capcom seemed to have gotten stuck on iterations of Street Fighter II for the better part of a decade, once they broke through to SFIII in 1999, the game was changed again for the better!

Honor the art and style of your favorite video game franchise with this Street Fighter III 3rd Strike Alex 1:8 Scale Statue. Based on a vague hybrid of Hulk Hogan and Axl Rose, Alex is the main character of the third Street Fighter. This New Yorker is ripped beyond belief and ready to take on all comers in the street.

Standing at about 9 ½-inches and sculpted with exacting detail, this statue will draw attention from the entire room. The translation of the 2-D action icon into the 3-D world could not have been done more faithfully or lovingly. This is the perfect statue for any Street Fighter fan! Coming soon, this statue can be pre-ordered now from Entertainment Earth!