Why This Muhammad Ali Action Figure Is “The Greatest” 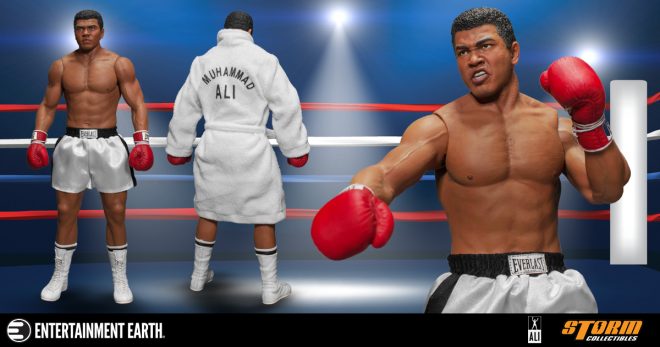 All people have to say is, “The Greatest” and you know who they’re talking about. For many people, Muhammad Ali is not only the greatest boxer of all time; he’s one of the greatest athletes off all time. Ali won a gold medal in the 1960 Olympics; he was the Boxing World Champion in 1964. He even won the championship again twice in the 1970s, after it was taken from him for refusing to fight in the Vietnam War. After being diagnosed with Parkinson’s Disease – following his retirement from boxing – he continued to be a presence, turning to philanthropy for the remainder of his life, which was capped by his being awarded the Presidential Medal of Honor in 2005.

Books have been written about this man, movies and specials have been made, and now, for the first time, the official 1:6 scale action figure of the storied boxer will be available to collectors from Storm Collectibles in November 2017. This meticulously designed figure stands 13-inches tall, is fully articulated and shows the boxer ready to fight in white boxing shorts, with a black waistband and black stripes down each side, and red boxing gloves. Other boxing gear, created in partnership with Everlast, includes a robe, stand, and punching bag. Two different head sculpts complete the ensemble.

No other boxer could “float like a butterfly, sting like a bee” the way Muhammad Ali did, and now you can pay tribute to this peoples’ champ by pre-ordering the beautifully crafted Muhammad Ali The Greatest 1:6 Scale Action Figure. And, as a bonus, shipping is free.