Stolen plans for mobile battle stations aren’t the only secrets you can find in the droids of the Star Wars universe – or at least, in the toys they’ve inspired.

You’ll find a wide variety of “Easter eggs”: not the colorful, hardboiled or candy kind being hidden in countless baskets and backyards this holiday weekend, but little-known features and functions; fuller depictions of what’s seen on screen; tidbits of background information and trivia about the films (including revelations that were “spoilers” in their day); and all sorts of fascinating facts that enhance our understanding and enjoyment of pop culture’s greatest space saga.

Can’t make it to this weekend’s Star Wars Celebration fun in Orlando? Come hang out with some of the Star Wars‘ highest-profile high-tech inhabitants instead as we hunt three most interesting droid Easter eggs!

“What’s So Important? What’s He Carrying?”

That’s what Han Solo asked about R2-D2 after all the excitement of escaping from the Death Star was over. And this Kenner 1978 large-size R2 action figure (“not a radio control toy,” the original packaging cautions customers) made sure it included the answer.

In addition to a clicking chrome dome and wheeled feet, this 7 1/2-inch tall R2-D2 boasts a button-operated “secret compartment” on his back that includes two illustrated, removable (and thus easily losable) pieces of plastic: not only the “technical readouts” of the Empire’s dreaded Death Star but also an “electronic circuit” – what we assume is the astromech equivalent of a spare tire.

Although C-3PO complained about his appearance in Cloud City – he wasn’t quite put together, you see (sorry, couldn’t resist) – Kenner’s re-release of the 3 ¾-inch figure for Star Wars: The Empire Strikes Back line in 1980 looked pretty sharp. It was the same sculpt used a few years earlier, but this Threepio’s limbs could be detached, stuck in the accompanying vinyl “net,” and carried on the back of your Chewbacca action figure.

This disarming version of the protocol droid (sorry, I really can’t help myself) is the one I remember playing with the most as a first-generation Star Wars fan. A toy that was meant to be disassembled was a real novelty!

Bringing Droids Into the Light 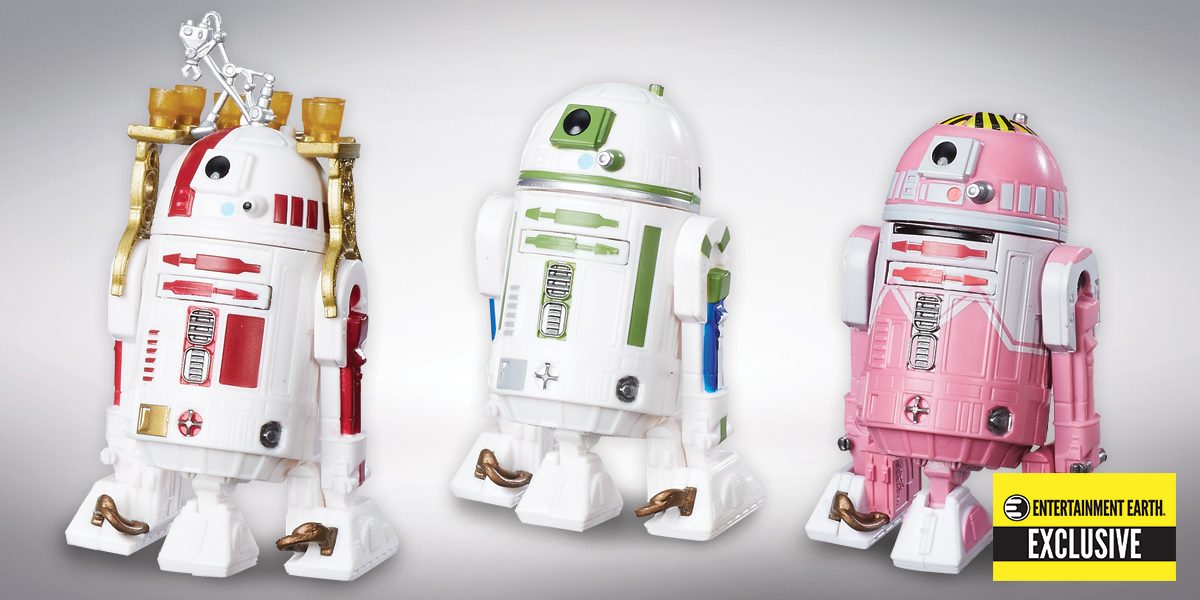 The star of this cybernetic six-pack may be Jabba the Hutt’s red-and-white racing-striped “bartender” droid. In Star Wars: Return of the Jedi, you can spot this droid only briefly, in the shadows of Jabba’s sail barge, and even then only its back. This set marks the droid’s debut as an action figure. (Still no alphanumeric designation for this little one – better luck next time!)

But the set also features other notable droids. R2-A5, for instance, could be seen in Mos Eisley back in 1977 but got removed twenty years later to make room for a ronto (sorry, Ayfive; it’s not easy being green).

And then there’s pretty-in-pink QT-KT from Star Wars: The Clone Wars. In-universe, Qutee belonged to Jedi knight Aayla Secura; in real life, the droid was named in honor of Katie Johnson, the young daughter of 501st Legion founder Albin Johnson. Katie passed away in 2005 of an inoperable brain tumor, but thanks to QT-KT (and sister droid R2-KT, who has three cameos in Star Wars: The Force Awakens), her memory lives on.

What’s your favorite “Easter egg” in a Star Wars toy (droid or otherwise?) Let us know in the comments below, and maybe we’ll feature it in a future installment of the series!