Star Wars action figure enthusiasts received good news at this year’s Star Wars Celebration in Orlando. Hasbro announced its popular “The Vintage Collection” – new figures packaged on cards that reproduce the classic Kenner look from the late 1970s and early 1980s – will be returning next year, with a lineup determined in part by fan vote.

A great middle ground between basic 3 3/4-inch action figures with little concern for screen-accurate detail and more precise but pricier The Black Series figures, The Vintage Collection has also been a hit because it captures the nostalgic fun first-generation Original Trilogy fans remember while encompassing the entire breadth of the Star Wars saga.

To celebrate the 40th Anniversary of Star Wars and get ready to welcome the line back, let’s look at some of the fan favorite The Vintage Collection figures so far. Here are the first six entries on our top ten list – page 2 we’ll reveal the final four!

Except for its Sandtrooper figure (a figure never seen on a vintage-style card), Wave 2 of The Vintage Collection (released in September 2010), focused on the most recent – and presumed final – Star Wars film, Star Wars: Revenge of the Sith. This wave was the first-time figures of characters from outside the Original Trilogy came on Kenner-style cards. Looking at the packaging makes you feel like you’re peering into an alternate universe where the Star Wars movies were released in internal chronological order.

Appropriately enough for a wave spotlighting a movie in which the bad guys win, Wave 2’s standout figures were Darth Sidious and General Grievous. 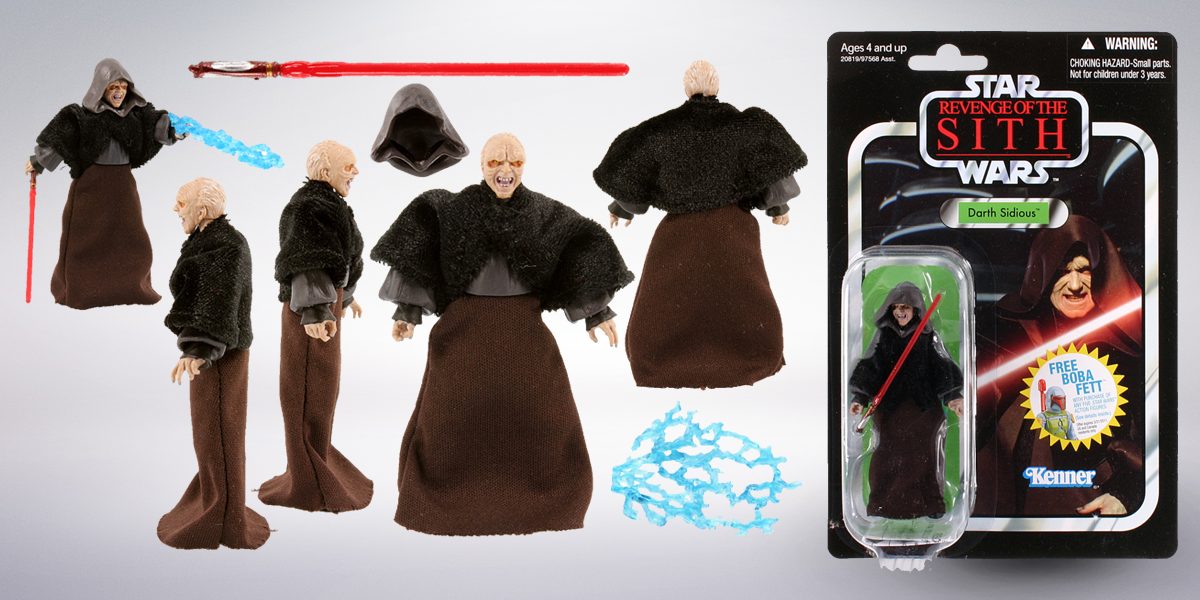 Darth Sidious wears the brown robes and black stole he wore while fighting Yoda in the Senate chamber, demolishing it in the process (a none-too-subtle visual metaphor for democracy’s destruction). Take off his hood, and you can see the self-appointed Emperor in all his evil glory. His accessories include the Sith’s signature red-bladed lightsaber and a lethal dose of Force lightning!

The General Grievous figure was based on a figure from the Legacy Collection only the year before, but it earns the well-worn phrase “new and improved.” Hasbro kept the original figure’s multiple points of articulation, gave it new arms (which could still separate), and clothed it in a soft cloth cloak that boasted Grievous’ emblem on the back and, as in the film, pouches in the lining where the Droid Army commander stores lightsabers swiped from fallen Jedi. And while Anakin Skywalker thought General Grievous himself would be taller, this figure is one of the tallest 3 ¾-inch Star Wars action figures ever produced.

The Vintage Collection’s third wave hit stores in November 2010, starring characters from the third movie (in release order), Star Wars: Return of the Jedi, including one figure that had never been seen in action figure form.

In 1983, Kenner released a figure that looked a lot like this, calling him “Klaatu.” But according to Wookieepedia – and far be it from me to not let Wookieepedia win – Klaatu and Wooof are two different characters from the same species, the Nikto. (See what confusion comes from production names that pay homage to classic science fiction films?)

So Wooof became the first character from the original trilogy to make his action figure debut in the post-prequels era. But even if he couldn’t claim this distinction, he’d still be a cool toy. With ball-hinged head, shoulders, elbows and knees, swivel wrists and waist, and pivot hips, he’s incredibly poseable. Both his bandolier and helmet can be removed (the faux-fur skirt stays on – even the Nikto deserve their dignity), and he comes equipped with blaster and vibro-ax. Wooof wasn’t a bestselling figure, but he’s made many a collector’s heart stand still.

One of Wave 3’s other highlights was a gorgeous Gamorrean Guard figure – if “gorgeous” can be applied to Jabba’s pudgy, piggy enforcers. (You won’t hear me telling them otherwise!) Unlike Wooof, the Guard sold briskly, as troop builders often do, and remains notably elusive even after multiple re-releases. Clad in detailed armor, a soft goods skirt and a removable helmet and harness, the Guard can grip the vibrolance and the short- or long-handled ax it comes with. It’s not hard to see why the experts at Jedi Temple Archives picked the Gamorrean Guard as The Vintage Collection’s #1 action figure.

Originally slated for Wave 3, Wedge Antilles made his first non-exclusive single-carded release in April 2012 as part of Wave 4 instead.

Although his body is kit-bashed from older figures, the new head sculpt – under a removable but very tightly fitting helmet – bears an impressive and immediately recognizable likeness of actor Denis Lawson. Maybe Hasbro’s new Vintage line will include an all-new figure for the only other Rebel pilot to survive the battles of both Death Stars!

This figure is another example of a recycled body (in this case, the Vintage Collection’s Phase I Clone Trooper), but the red paint flashes denoting his rank set Fordo apart, as does his wide array of accessories. He comes with helmets from both Phase I and Phase II armor, as well as two blasters, a Phase 1 holster, a Phase II pauldron-holster combo, and a soft, gray-and-red kama.

Fordo’s military prowess and distinctive appearance have made him a fan favorite, and clone enthusiasts seem to agree this figure’s exceptional features more than make up for its lackluster card name!