The live-action Batman TV series ended its run with a final episode on March 14, 1968, and yet, in many ways, the heroes and villains from that show are as popular today as they were during the show’s three seasons. In response to that popularity, Funko has created action figures from the much-loved show.

Fans of the Batman series will love Funko’s exact recreation of Adam West as the caped crusader. Dressed in the familiar costume showing the bat insignia in a yellow spotlight, the figure even has the familiar Adam West smile.

Fans will also recognize Yvonne Craig as the Batgirl action figure, wearing her purple uniform, with the bat in yellow, and yellow lining the inside of her cape. Both figures include their always handy utility belts.

One can also pre-order action figures of Adam West and Burt Ward as Batman and Robin with their famous batmobile from the show. Thanks to their rubber capes, the figures can sit in the super-powered car as they zoom out to face off against the next crazy bad guy. Complete with rotating wheels, the batmobile has been created in 3 3/4-inch scale and is 10 3/4-inches in length. The three together will be for sale in a window display box, ideal for collectors.

As anyone who followed, or still follows the show in reruns knows, as much fun as Adam West and Burt Ward were as the dynamic duo, it was the many wacky villains who made the show so great. So Funko will also be coming out with action figures of four villains from the show. 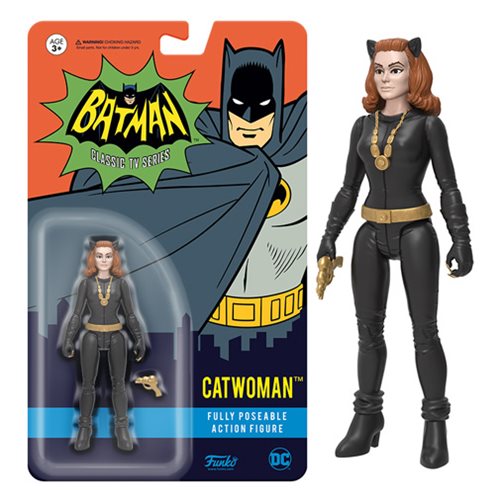 They include Julie Newmar as Catwoman in her slinky black outfit complete with the pendant around her neck and gun in hand. Also included is Victor Buono dressed in the Egyptian regalia of King Tut, and Bookworm, as played by Roddy McDowell, with book in hand and a spotlight on his hat.

Finally, fans of Mr. Freeze can pick their favorite portrayal of the cold villain. The Otto Preminger Mr. Freeze is the standard figure or they can try to get the Eli Wallach chase variant. In the Batman TV series, Mr. Freeze was portrayed by three indifferent actors so this chase is a nice little nod to at least two of them.

Displayed in a blister card, each action figure is 3 3/4-inches tall and features nine articulations. Now is your chance to relive the many epic battles these characters fought during the popular Batman TV show. Pre-order the whole Batman 1966 action figure set now.