These Frozen Nendoroid Figures Will Melt Your Heart

“Some people are worth melting for.” These adorable Frozen Nendoroid Figures prove just that! Take home your favorite characters from the hit Disney film.

The Frozen Anna Nendoroid Figure is as cute as a button. The freckles on her face have been faithfully included on her Nendoroid rendition, and the outfit she wears to keep the cold out has also been shrunk down into Nendoroid size! The cape, hat, and gloves are all removable, so you can also pose her simply wearing her dress with its beautiful patterns. Anna also comes with special parts that allow you to display her walking along with her hands behind her back. Olaf is also included in an alternate version wearing a hat and holding a cane, and she even comes with special hand parts to display her holding hands with Nendoroid Elsa (sold separately). 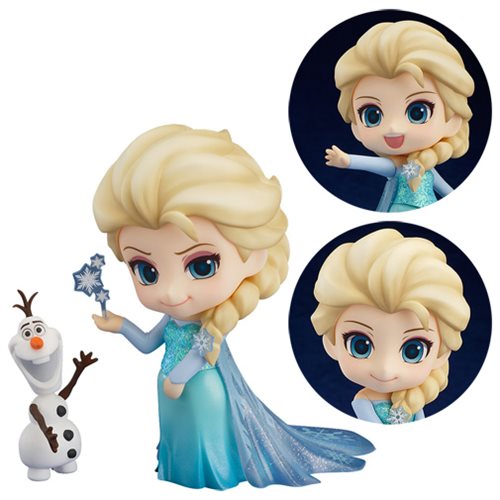 Let it go with the Frozen Elsa Nendoroid Figure. Her intricate dress has been carefully transformed into Nendoroid size, even including the faint yet beautiful snowflake patterns. She comes with three expressions including a cute smiling face, a sidelong glance with a smirk and a singing face that looks ready to shout out “Let it Go!” at any moment. Olaf is also included with his comical expression from the series faithfully reproduced – his neck and arms are also articulated allowing you to recreate all sorts of fun scenes for him too. A special Nendoroid base based on Elsa’s ice castle is also included to display them on.

Both figures stand slightly under 4-inches tall and come packaged in a window box. They’ll be hitting the shelves in October 2017. Place your pre-orders with Entertainment Earth now!