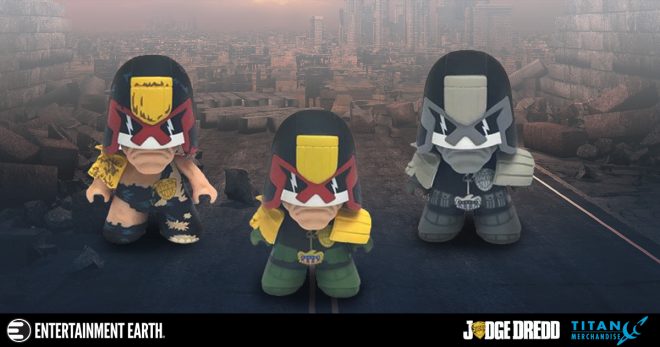 Since his first appearance in the 2000 AD comics, Judge Dredd has been an iconic hero of dystopian fiction. The idea of a police force able to act as judge, jury, and executioner is more than a little frightening, but at least Dredd has always used his powers for good.

Sure, he wears a permanent grimace, never takes off that helmet, and tends to shout, “I AM THE LAWWWW!” a lot, but ultimately his cloned heart is in the right place.

Now you can bring home a trio of fun-sized versions of Mega-City One’s greatest hero thanks to Titan Merchandise.

Each Titan figure is a Previews Exclusive, stands about 4 1/2-inches tall, and comes packaged in a collector-friendly window box. It’s been forty years since Judge Dredd first blasted onto the scene – but you’ll only have to wait until October to add this trio of fearsome fighters to your collection. Order today and we’ll ship the moment they arrive!