The Classic and Original Symbiote is Back! 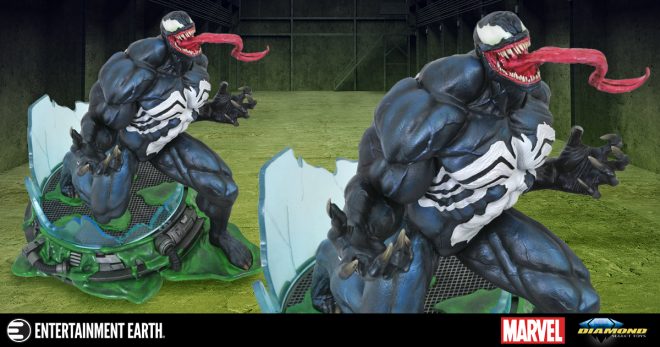 With Spider-Man: Homecoming hitting theaters very soon and the announcement of Venom getting his own movie, the Spider-verse is getting some big time love. Tom Hardy will portray Venom in his first solo live-action film and fans cannot wait to see what we get from this beloved villainous character. Since Venom debuted in comics, he has been a staple of the Spider-Man universe and with good reason. He has a great back story and looks terrifying. That’s why he has such amazing action figures, toys, and collectibles!

From the Marvel Premier Collection, this limited Venom statue is a must-own for any comic book fan. Breaking out of the glass and with green ooze surrounding his feet, Venom is angry and ready to strike. The detail is incredible, down to the sharp fangs and long menacing tongue. Sculpted by Alejandro Pereira, this statue is beautifully painted and crafted and would pop in any room or setting. The statue stands at 12-inches and is made of resin.

Venom has been reborn in the Marvel comics recently and is going to be a huge factor in the live action Spidey-Verse so you’re going to want to jump on the Symbiote train now to beat the rush! There are only 3,000 pieces of this statue so strike fast before another wall-crawler takes yours!

Collectibles Statues
Related ItemsCollectionDiamond SelectMarvelMarvel PremierSpider-ManStatueVenom
← Previous Story How This Walking Dead Action Figure Will Make You Appreciate TV’s Biggest Villain…
Next Story → Are You Ready for a Shopping Spree with Harley Quinn?