Has any other movie or TV villain received a bigger build-up than Negan? From the moment the leader of the Saviors stepped outside of his trailer near the end of the season 6 finale of The Walking Dead, his trusty barbwire-covered bat Lucille in hand, Rick and his group knew their lives were going to get much worse, which is saying a lot considering the apocalyptic world in which they are forced to live. Negan’s rules were simple: give at least half of your food and supplies to the Saviors, forage for Negan, or you’ll be forced to have a “conversation” with Lucille.

By the end of season 7, however, the stage was set for a war between the Saviors and the combined might of the Alexandrians (Rick’s group), the Kingdom, and the Hilltop. How best to commemorate what is sure to be an epic battle by ordering The Walking Dead action figure due out April 2018. Standing at 12-inches tall and looking exactly like Jeffrey Dean Morgan, the actor who plays Negan, the figure is dressed in the character’s familiar leather jacket, long-sleeved shirt, scarf, and pants with belt, as well as a larger belt, boots, and left-wrist bandage.

Among the figure’s many accessories is two versions of the infamous Lucille: one plastic with a wood varnish finish and embossed wire, the other made of wood and covered by DIY iron wire. Other accessories include a gun (Colt), hatchet, marker, and various versions of Negan’s hands, such as a pair of both relaxed and gripped hands, with the right hand gloved, and a gripped and gloved right hand made for Negan to hold his Colt. 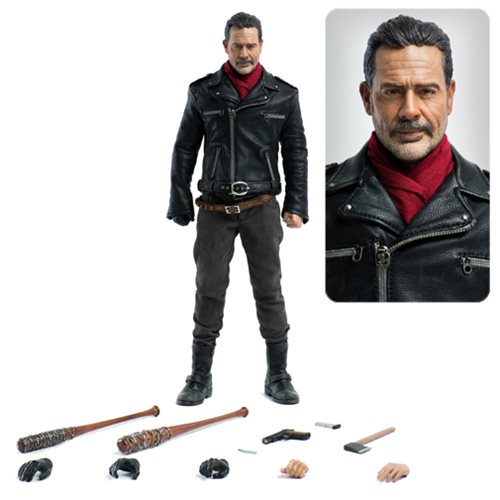 Action Figures Collectibles
Related ItemsAction FigureAMCNeganThe Walking DeadTWD
← Previous Story Grab the Infinity Gauntlet and Save before It’s Too Late
Next Story → The Classic and Original Symbiote is Back!