Come Home with a Slew of Spider-Man Stuff! 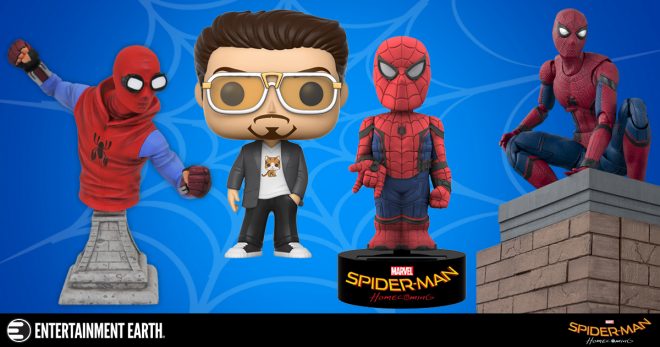 The third attempt at a Spider-Man film franchise has begun. Spidey swung into the MCU in Captain America: Civil War and is now debuting in his first solo flick Spider-Man: Homecoming. Peter Parker is back on our movie screens and that means more wall crawling fun and adventures. It also means all kinds of new Spider-Man branded products to get grab with our sticky fingers. Here’s just a few items you can find at Entertainment Earth:

Can any of us actually say they have enough Pop! Vinyl figures? Just in time for his appearance in Spider-Man’s new movie, Tony Stark is here with a brand new Pop! figure! He’s dressed like he appears in the film, with a kitty tee shirt on and fashionable sunglasses and if that wasn’t enough it’s also a bobble-head. The perfect fit for your set of MCU Pops!

We’ve all picked up a brand new toy, opened it up, excited to play with it only to find out the batteries aren’t included. It’s a terrible feeling, but not one you’ll have thanks to Spider-Man! This solar-powered body knocker will sway in the sunlight with no batteries needed. While you’re rocking out to Spider-Man theme song, so is Spidey as long as you’ve got a little light shining in the room. He sways left and right when exposed to light, it doesn’t get any easier. Have fun while being all science-y. Just like Peter Parker.

Recreate a scene from the new movie with this fantastic piece. The figure comes with multiple interchangeable body parts, accessories, and pieces to the diorama to make it really jump out from your display shelf. It features astounding articulation which allows you to pose him in all the classic poses caught on film by Daily Bugle photographer Peter Parker.

We already know that Tony Stark has made some alterations to Peter’s original Spider-Man suit but now you can have a piece of the original homemade costume as part of your collection! This Spider-Man bust recreates the homemade version of young Spidey’s first costume made for the movie. The bust stands 6 inches tall and comes packaged with a hand numbered box and certificate of authentication.

With all these items, there’s sure to be at least ONE thing for that Web-Head in your life. Thwip on over to Entertainment Earth now to buy one today!