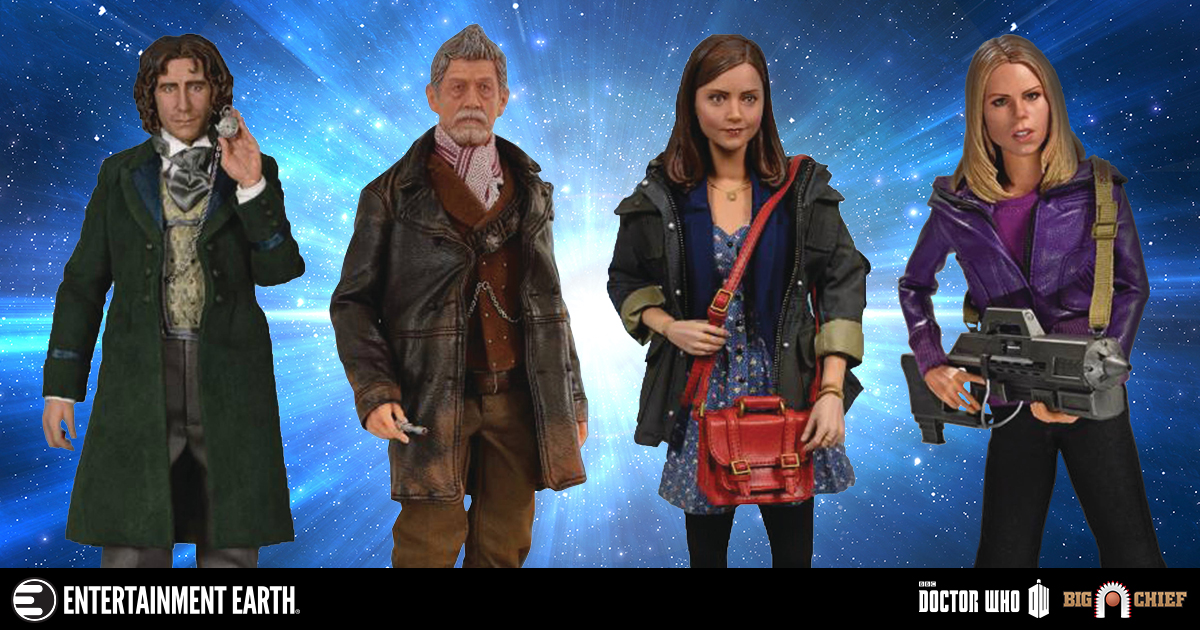 For all the strange, strange creatures and timey-wimey loop-the-loops that make up Doctor Who, it’s the core premise of the Doctor and his companions wandering in the fourth dimension that fans find so appealing. We can all enjoy either imagining ourselves as the Doctor or identifying with his associates – or even enjoy doing some of each.

BIG Chief Studios is unveiling the latest masterfully sculpted and impeccably detailed entries in its line of deluxe Doctor Who action figures.

All are 1/6th scale and stand between 11 and 12 inches tall. All boast uncanny likenesses of the actors in the roles, multiple points of articulation and eight interchangeable hands to allow for a wide variety of poses, and light-up display bases highlighting them as the works of art they really are.

Garbed in a stylish Victorian forest green frock coat and three-piece suit complete with cravat, the Eighth Doctor stands ready to save San Francisco and the world from the Master’s evil machinations at the dawn of a new millennium.

The 1996 Doctor Who TV movie looked like it might be actor Paul McGann’s only outing as the Doctor. It didn’t revive the then-dormant franchise but did introduce a Doctor who soon found fans in novels, comics, and audio adventures. He finally returned to the screen (though sporting a very different look) in the 2013 mini-episode “The Night of the Doctor.”

This figure comes with numerous iconic accessories, including a pocket watch with chain, a bag of jelly babies, a yo-yo, and not one but two sonic screwdrivers (one open, the other closed). 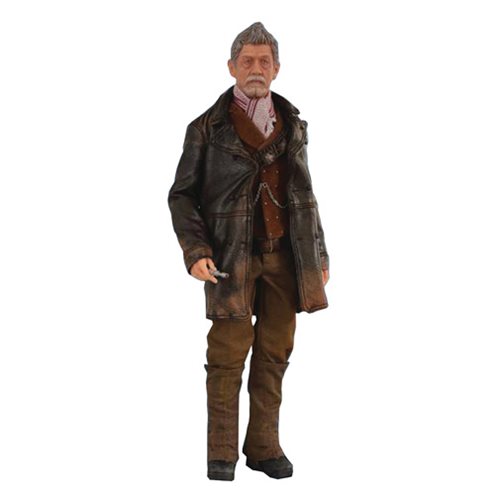 In order to stop the Time War ravaging the time-space continuum, the War Doctor resolved to destroy all Daleks and Time Lords. It would have been – and, in one timeline, was – “a crime that would silence the universe.”

Fortunately, as we saw in the 50th anniversary extravaganza “The Day of the Doctor,” Clara persuaded not only the War Doctor but also the Tenth and Eleventh ones to rewrite history, saving Gallifrey and his own good name.

BIG Chief’s War Doctor figure perfectly captures John Hurt’s war-weary performance. His worn, weathered leather-effect jacket suggests the traumatic century he’s spent in the thick of battle. He comes with a sonic screwdriver but also armed for the fight with a Gallifreyan laser rifle and the cube-shaped “Moment” – the sentient “galaxy eater”… the ultimate weapon that, by the episode’s end, 13 Doctors worked together to avoid using. 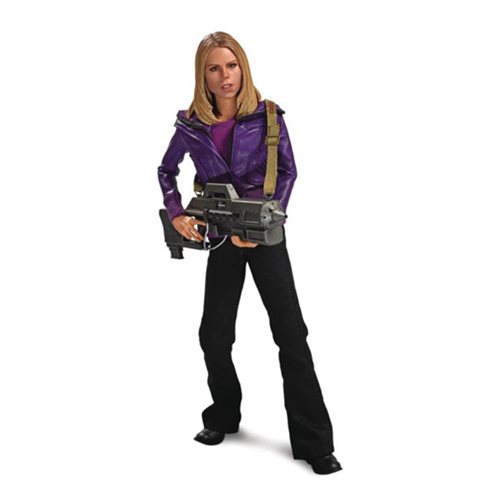 She was the first companion of the modern Doctor Who era and remains many fans’ favorite. Rose Tyler was brave, beautiful, and (as the Ninth Doctor praised her just before he regenerated) “brilliant.”

Rose saw many dramatic moments during her travels in the TARDIS. BIG Chief has immortalized her as we saw her in the fourth series’ epic two-part finale “The Stolen Earth”/“Journey’s End”: Wearing a sharp purple jacket and wielding a gigantic Torchwood-issue gun against the Daleks!

Rose never got to hear the Tenth Doctor tell her he loved her, but you’ll love this likeness of Billie Piper at her action hero best. In addition to the Torchwood Gun, Rose comes with her TARDIS key, mobile phone, and the Dimension Cannon she used to save the world from Daleks and Cybermen at Canary Wharf.

She was “the Impossible Girl” – forever running after the Doctor, in all his incarnations. But once her existence was no longer tied up in his, she became one of the most fully realized and fascinating companions Doctor Who has seen.

This figure of Clara features a beautiful likeness of Jenna Coleman and wears a floral print dress, blue blazer (TARDIS blue, naturally), and a dark green outdoor coat. Her accessories include “the most important leaf in human history” and the book, 101 Places to See, in which Clara’s mother pressed it.

Another book is present, The History of the Time War, which Clara discovered in the Doctor’s library. Unfortunately, that book comes closed, its mysteries reserved for Clara’s eyes only; but one of the two included Gallifreyan Confession Dials is open.

As long as Doctor Who airs, there will always be Doctors and companions. But we can’t make the same promise about these four fabulous Doctor Who action figures! Avoid disappointment and make sure these artful figures materialize in your collection by placing your pre-order today!

Action Figures Collectibles
Related ItemsAction FiguresDoctor Who
← Previous Story The First Order or Resistance – What Side Are You On?
Next Story → 5 Cute and Cuddly Porgs from Force Friday II