SPOILER: Who Is the Fastest DC Superhero?

Everybody knows Superman is “faster than a speeding bullet.” But is he also faster than the Fastest Man Alive?

Celebrate the most famous friendly rivalry in superhero comics with this spectacular new statue from DC Collectibles!

The Man of Steel and Scarlet Speedster’s racing stretches back 50 years, all the way to their charity match-up for the United Nations in Superman #199 (August 1967). This statue evokes that issue’s iconic cover but shows off the heroes’ current, Rebirth-era costumes.

The Flash looks like he’s got an early lead, with Speed Force lightning crackling under his feet. His confident grin says he’s feeling good about his chances! And with good reason: The two have sometimes tied, but Superman hasn’t ever beaten The Flash in a foot race (Supes’ claim to the contrary in 2009’s Flash Rebirth #3 notwithstanding – besides, as The Flash told him, “Those were for charity, Clark!”).

Still, there’s a first time for everything. Superman’s cracking the asphalt and stirring up some mighty amounts of dust. He looks determined to put this head-to-head in his win column!

Fortunately for fans, this statue makes both of these DC Comics greats look like winners. Sculpted in premium polyresin by digital sculpting masters Alterton and Alejandro Pereira, this dynamic display piece is just under 10-1/2-inches tall.

But if you want the DC Gallery Superman vs. The Flash Racing Statue as the stunning centerpiece in your Superman or Flash collection, you’ll have to move fast, too, because it’s strictly limited to 5000 units.

At least you won’t have to run anywhere. Free shipping from Entertainment Earth will bring these speedy superheroes straight to your door as soon as they’re available. 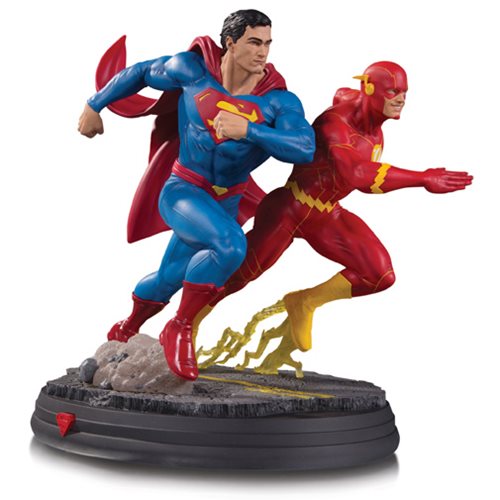