A Brief History of Wookiee Toys

There really isn’t much the Star Wars universe can’t do – except maybe a holiday special. In 1978, hot off the heels of Star Wars: A New Hope, Lucasfilm released a made-for-TV-movie that instantly become known as one of the worst Star Wars spinoffs ever made. While it introduced audiences to the Wookiee homeworld of Kashyyyk and a handful of cool characters (including Boba Fett), it also featured a bunch of regrettable characters, including Chewbacca’s awkward family.

To coincide with the special, the toy company Kenner planned a wide release of Wookiee toys, including Chewie’s mom, dad, and son Lumpy. Unfortunately, the Holiday Special was so poorly received that Kenner decided to scrap production halfway through, leaving this wonky Wookiee family to remain in toy limbo forever.

Luckily for Wookie fans, other toys were still made. So, in honor of Wookiee Wednesday, here’s a look back at some of the awesome (and a few not-so-awesome) Chewbacca and Wookiee toys over the years.

A Star Is Born

In 1977, Star Wars hit theaters and fans the world over were introduced to Han, Luke, Leia, and, of course, Chewie. While the movie turned out to be a hit, the mom-and-pop company in charge of marketing the toys was in way over their head trying to meet market demand. In fact, most of the original toys sold in the first year weren’t toys at all: they were empty cardboard boxes with a simple voucher promising said toy sometime in the future.

Seriously, can you imagine waking up on Christmas morning and opening a Star Wars box with no toy inside? As strange as it sounds, the tactic worked, and by the time the next movie hit theaters kids were finally able to have their very own Star Wars toys.

A Chewie in Time

As a central character in the movies, Chewie’s seen his fair share of iterations in toy form. More than that, there’s been an insurgence of other non-Chewie Wookiee characters too. While the original Chewbacca toy featured movable limbs and came with his own bowcaster, later iterations would include shaggier hair, a scarier grimace, and tons of added possibility.

From Tarfful, the mammoth general in Star Wars: Clone Wars to Merumeru, an elder sage who wields a powerful staff, the Star Wars universe is rich with Wookiee action figures. Of course, while the character models, backgrounds, and stats may differ, they also come toting their towering stature, powerful strength, and a maw full of razor-sharp teeth. 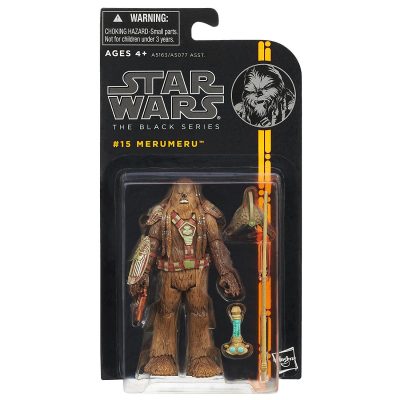 Bounty Hunter Snoova Chewbacca, or “Flattop Chewie” is a sight to behold. Part of the 1996 Shadows of the Empire line, this figure found Chewie with one of his only hairstyle changes. And while it’s not canon, it’s still a really cool Legends (Expanded Universe) figure to have in your Wookiee collection. 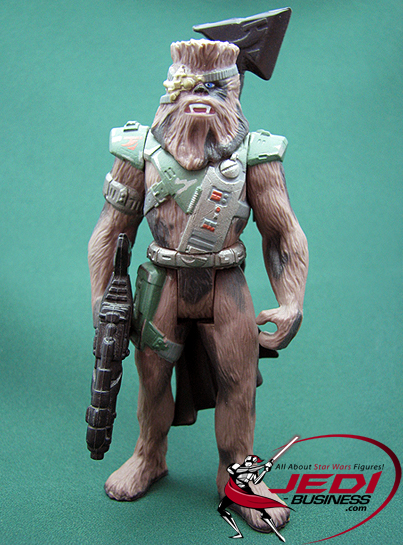 And then there’s Mynock Hunt Chewbacca. As one of the few Chewie figures to feature accessories other than a bowcaster and belt, this 2003 figure came with its own space alien Mynock accessory and a non-removable face mask. As a traditional action figure it’s pretty hit-or-miss, but as a standalone piece, it makes for one great piece.

When it comes to recent Chewie releases, toy designers have started going back to the character’s roots and have been modeling him more off of his original 1978 release. The Last Jedi Chewie shows our favorite Wookiee coming full circle, with the same articulation, size, and standard bowcaster and satchel. As an added bonus, he also comes with his own porg.

And then there’s Forces of Destiny Chewie. As a highly detailed action figure, he’s a lot bigger than the traditional 3 3/4-inch standard. He’s also more posable. This one also came with realistic fur and his own electronic “rawrarwarar” sounds.

Chewie Gets the Hot Toys Treatment

When it comes to articulated detail, no one does it better than Hot Toys. Released in 2015, the Chewie figures came with tons of interchangeable features, including various hands and his signature bandolier bag. He also came with one seriously hefty price tag.

With 30 points of articulation and subtle details out the wazoo, they’re arguably considered one of the highest points of Star Wars action figures. Seeing just how good this figure looks, it’s easy to see why.

Move Over, Furby, There’s a New Plush Toy in Town

Now, in anticipation of Solo: A Star Wars Movie, Hasbro’s pushing its own Wookiee Weekend to coincide with the film’s release. Among the new product releases is a brand new Chewie toy. Now, this isn’t your traditional Wookiee; instead, it’s one of the first in a new line of interactive Star Wars toys.

That’s right! This cute little co-pilot can autonomously respond to both sound and touch. It also comes with a repository of more than 100 different reactions, including his signature roar. First unveiled at the New York City Toy Fair earlier this year, it was an instant hit among fans.

Did we miss anything? What’s your favorite Wookiee or Chewie action figure? Let us know in the comments below.