The Most Vicious Villain Gets His Own Limited Edition Resin Statue

What makes a good villain? When it comes to TV bad guys, is there one that springs to mind immediately? Is there a villain you love to hate? Is there a baddie you just plain despise, regardless of his/her charm?

The argument could be made that over the last few years, Negan from The Walking Dead is one of the best villains of both the comic book and television media. While he speaks in such a confident and commanding manner that inspires respect, he behaves in the most notorious and vile ways. Though he justifies his actions with survival, there’s no mistaking that this man is a murderer. When he’s not tormenting Rick and the rest of our walker-killing friends, he’s a fierce provider for those who serve him loyally, and he protects what’s under his domain. But you can turn the tables so Negan is under your domination with this brand-new McFarlane Toys statue!

The limited edition Negan statue is hand painted and made of cold-cast resin, and it perfectly captures Jeffery Dean Morgan’s portrayal of the wildly popular baddie. The statue shows Negan destroying a walker’s skull with his trusty barbed-wire baseball bat, Lucille, while two other walkers reach out for him. The piece stands 12-inches tall and features magnetic assembly and a rotating base. There are only 1,000 of these bad boys, and each one is individually and sequentially numbered.  Plus, they come with a certificate of authenticity hand signed by Todd McFarlane himself!

In the world of The Walking Dead, survival is everything and tomorrow is never guaranteed. But in our world, the guarantee is that this statue is going to move fast and sell out. Make sure you score one of the most detailed statues of one of this generation’s most interesting and hated characters ever depicted on television or in the comics. If you do miss out on this statue, let’s just say it’ll be pee pee pants city for you real soon. 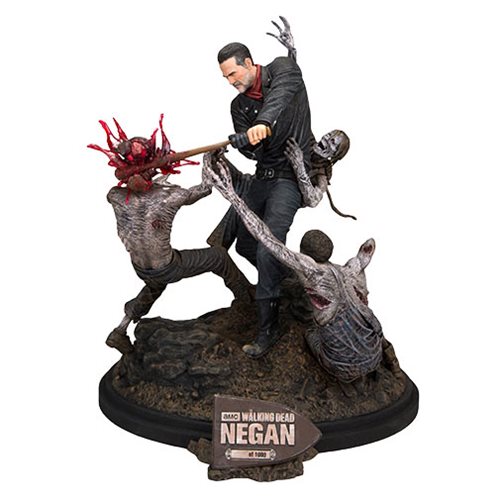