DC Collectibles has unveiled a new multi-part statue centered on Batman with some stellar members of the Bat-Family that can be displayed together. After the success of the Teen Titans Multi-Part Statue Set, it’s no wonder that DC would choose Batman for their next collection. There will be five magnificent statues that create an action scene when displayed together.

First to be released will be Batman. The figure stands about 9 2/3-inch tall and features Batman perched atop a brick smokestack. It is meant to be the focal point of the multi-part collective with the rest of the family around him. All of the specifics are spot on making this a great way to display the Dark Knight. Batman himself is also very detailed and spectacular. He’s wearing a classic gray and muted blue Batsuit along with a yellow belt that almost can’t be seen through his crouching position. Looking like he is ready to pounce at a moment’s notice, he stares off into the distance just waiting for some action. Although, he is a stationary figure there is a sense of movement from his wispy and tattered cape. All-in-all, this is a magnificent piece that deserves to be displayed.

Next to be released is Batgirl. She’s perfectly posed standing on top of a gargoyle with her arm stretched out ready to fire her grappling hook. The statue stands about 8 1/4-inches tall. Her bright blue and yellow costume definitely makes her stand out but it’s her wide smile that brings across that fun sensibility fans love. Whether she is placed along with the other pieces in the multi-part statue or displayed on her own she definitely makes a statement that fans of Batgirl will want to have. Make sure to put in your order before she jumps off into the night. 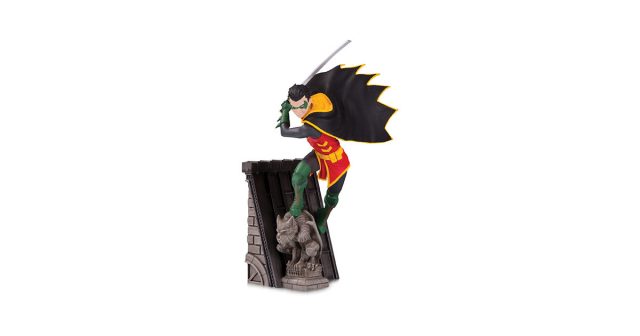 The third statue to be released in this five statue set is the Boy Wonder himself, Robin. He is strategically posed on another side of the building that can be assembled below the Batman centerpiece. The base itself is again very detailed, weathered and gives a bit of context for Robin’s action pose. He looks as if he’s about to jump into action with his katana drawn and his gaze dialed into his target. He’s a great piece that adds to the multi-part statue set as well as a great piece to be displayed all on his own.

So what about the other two statues that are left surrounding the Batman centerpiece? DC Collectibles has yet to announce the other statues but based on the silhouettes shown it’s pretty easy to guess.

All of these amazing statues are artfully sculpted from sculptor Chris Dahlberg out of polyresin. They each show off the specific personalities that make these pieces great individually but even more magnificent as an entire set piece. Each of the statues announced so far would be limited to 5,000 pieces so place your orders before these heroes disappear.

Which Bat-Family characters do you think the next two statues will be? Which statue is your favorite? Let us know in the comments below.