Have You Seen These 5 Weird Santa-Themed Toys?

Have you ever looked past its holly-jolly trappings to realize how strange the whole concept of Santa Claus is?

Think about it. Every December, millions of girls and boys fervently hope an old man will break into their homes while they sleep, trusting he’ll only take the milk and cookies on the hearth. In fact, kids expect he’ll leave them presents – if he decides they’re worthy, based on his remote surveillance of their behavior from his secure, undisclosed location at the North Pole!

These weird Santa-themed holiday toys and collectibles will make true believers and Santa skeptics alike think twice about our annual obsession with old Saint Nick. Ho, ho, ho – would you really go up on the housetop to hang out with these guys?

Someone Left out Beans for Santa This Year 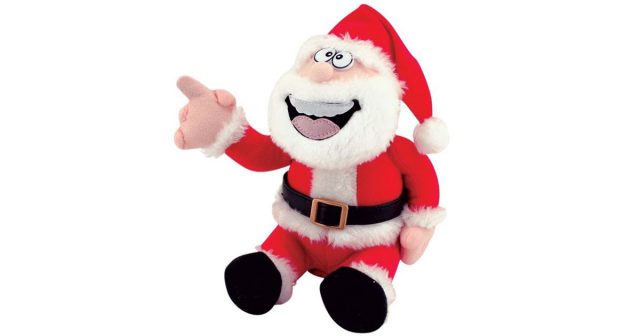 It’s bad enough Santa wants us to sit on his lap and spill our holiday secrets in front of crowds of strangers at the shopping mall. Now he’s trying the old “pull my finger” fart gag? We’d just as soon he keep his “finger aside of his nose,” like The Night Before Christmas says he’s supposed to! Programmed with such sayings as “That’s all you’re getting for Christmas” and “Was that on your list?” as well as his signature sound effect, this plush purveyor of festive flatulence will fill your Yuletide with yuckiness or yuks, depending on your “scents” of humor.

Don’t get us wrong: There’s nothing weird about dreidels. Spinning the sevivon and winning as much gelt as you can – especially the chocolate kind – is a time-honored Chanukah tradition. But what’s Santa doing on this spinning top, let alone the Christmas tree, candy cane, and snowman that have taken the place of the Hebrew letters that belong there? A great mix-up has happened here!

Santa Claws is Coming to Town… Look Out!

Here’s one Santa Claus whose naughty list you definitely don’t want your name to end up on. Judging from the looks of him, you might find a lot worse than a lump of coal in your stocking – assuming his spikes and razor-like claws don’t shred it to ribbons first! He’s definitely the kind of Kris Kringle you’d expect from the mind of Todd McFarlane, the comic book artist who made Venom an anti-heroic icon and created the occult, undead Spawn. Part of the 2007 Twisted Christmas action figure line from his company McFarlane Toys, this gas-masked and gauntleted Santa sports a soot-stained suit and cap… which you can remove to reveal his skull. No disrespect to Jack Skellington, but we think cowering under your bedcovers as you dread the arrival of McFarlane’s sadistic Santa would be the real nightmare before Christmas!

The Most Relaxed Santa of All

Be honest, now. You’re not really surprised to find out a hard-working guy like Santa has a taste for beverages stronger than milk, are you? This polyresin and PVC statue from the celebrated Kurt Adler collection of holiday décor shows jolly old St. Nicholas making merry at a tiki bar in a tropical paradise. He’s traded in his familiar red velvet for a Hawaiian shirt and Bermuda shorts (rendered in soft goods). Maybe seeing Santa take it easy for a change isn’t so weird… but not shaving that beard of his for the summer? That’s a little strange!

Won’t Someone Please Get This Elf a Tissue?

Weird Santas deserve weird elves (though come to think of it, unless they’re from Middle-earth, are there any other kind?), and here’s one of the weirder we’ve seen. Squeeze this little toymaker’s stomach, and he’ll shoot a ball of green foam from his nose as far as 20 feet.

Do you think this is how Santa’s helpers at the North Pole spend every Christmas Eve? The boss is only out of the office one day a year – better stand around shooting elf snot at each other!

Looking for some Santa Claus toys and collectibles – weird, wonderful, or some of each – to stuff your loved ones’ stockings, or even your own, this holiday season? Let Entertainment Earth help you make your list and check it twice!

What’s the weirdest Santa Claus toy you’ve ever seen? Tell us in the comments below!