“This Deal Gets Better All the Time!” Billy Dee Williams to Make His ONLY Appearance at San Diego Comic-Con 2019 at the Entertainment Earth Booth #2343 with an Autograph Session 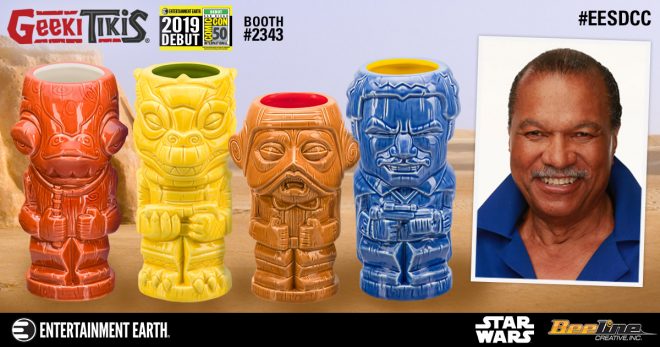 Hollywood icon Billy Dee Williams will return to the Star Wars universe as Lando Calrissian in Star Wars: The Rise of Skywalker, coming December 20, 2019, but you can see Billy Dee before then at his only San Diego Comic-Con appearance for a  signing on Saturday, July 20, 2019, 3 pm – 5 pm at the Entertainment Earth booth #2343.

This signing requires a ticket to attend. Details on how to register for a chance to win a  ticket to this event will be available at the Entertainment Earth booth the first day of the show. Registration closes approximately 60 minutes before the signing.

It’s NOT a trap!  This creative and colorful drinkware combines memorable Star Wars characters with the unique stylization seen in traditional Tiki culture. These ceramic mugs are even top-shelf dishwasher and microwave safe.

Entertainment Earth Convention Debuts are unique in that they will be sold on the SDCC show floor to attendees – before anyone else in the world – and have the official SDCC Debut sticker on the packaging.

The first opportunity for fans to grab these exclusives will be at San Diego Comic-Con on July 18, 2019, at the Entertainment Earth booth #2343.