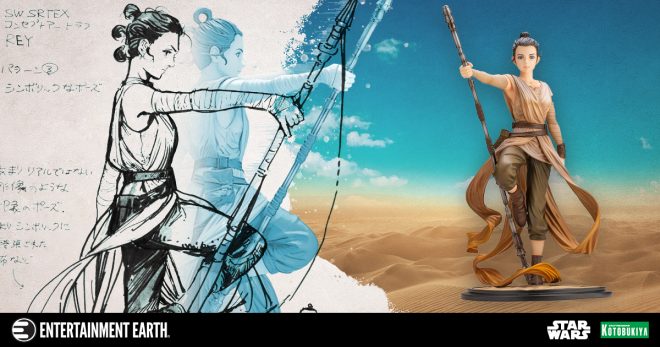 Of all the questions fans are hoping Star Wars: The Rise of Skywalker will answer, none looms larger than the mystery of Rey’s parents.

Will the Sequel Trilogy’s heroine turn out to be (as various hypotheses hold) the child of “filthy junk traders” (Kylo Ren’s claim in Star Wars: The Last Jedi)? A long-lost member of the Skywalker clan? A vergence in the Force? Someone else entirely?

Whatever the answer, Rey’s willingness to fight for what’s right and her unassailable hope prove she is, in some way, a descendant of light.

“Descendant of Light” is the title of this gorgeous new collectible statue from Kotobukiya.

The latest in its line of dynamically posed, exquisitely detailed ARTFX statues, this sculpture of the scavenger from Jakku turned heir apparent to the Jedi order captures all the strength, nobility, and grace that made Rey an instant fan favorite when introduced in Star Wars: The Force Awakens.

Kamome Shirahama – A Perfect Artist to Design a Rey Statue

She is no stranger to beautiful depictions of strong, heroic women!

Her series Tongari Boushi no Atelier [Witch Hat Atelier], about a young seamstress who discovers the artist’s pen can create actual magic, boasts unusually elegant and elaborately detailed pictures. It seemingly owes as much to such classic book illustrators as Walter Crane and Jessie Willcox Smith as to manga’s stylistic conventions.

In the US, she’s used the same bold lines and graceful composition to create stunning covers for such titles as DC Comics’ Batgirl and the Birds of Prey and Wonder Woman, and Marvel’s Phoenix Resurrection and The Unbeatable Squirrel Girl, among others for both publishers – including several of Marvel’s Star Wars titles.

She’s ideally suited to be the first artist in the Kotobukiya Star Wars project collaborative series.

A Graceful, Force-ful Portrait of Rey

In honor of Star Wars Celebration 2019, we're revealing the concept illustration for the first statue in our new ARTFX Artist Series! Illustrated by Kamome Shirahama, Rey -Descendent of Light- will be brought to life as a 1/7 scale statue! #starwars #kotobukiya #kamomeshirahama pic.twitter.com/AGQWBTAxoM

Kotobukiya posted the original “Descendant of Light” concept art to Twitter in honor of this year’s Star Wars Celebration.

Standing 10-1/2-inches tall, Rey wears the practical, lightweight outfit she wore in Star Wars: The Force Awakens. Is crisscrossing fabric swaths here billow around her, almost creating the illusion that she floats. She’s balancing on her left foot while gripping the quarterstaff she salvaged from Jakku’s Graveyard of Ships in her right hand.

The symmetrical, balanced composition isn’t just pleasing to the eye. It also hints at Rey’s innate aptitude in the ways of the Force. And it may evoke prophecies about balancing the Force. What role, if any, Rey will play in fulfilling them?

A print of Kamome Shirahama’s “Descendant of Light” artwork accompanies each statue, making this piece a doubly desirable acquisition.

Regardless of where you stand on the question of Rey’s lineage, there’s no question you’ll want to make the Star Wars: The Force Awakens Rey Artist Series Descendant of Light ARTFX Statue a centerpiece of your collection. It’s sure to prove popular since a companion piece called “Cloaked in Shadow” is set to follow shortly. Take a look at the concept art by Kamome Shirahama: