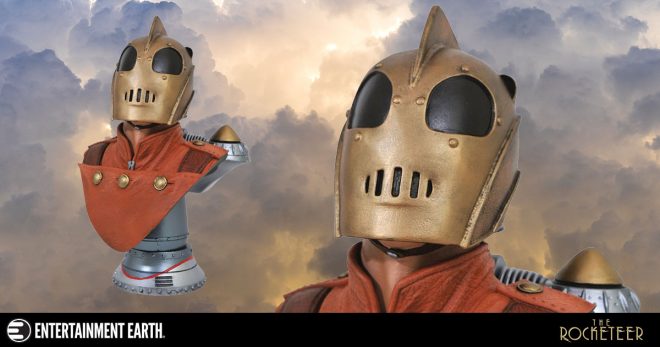 The Mandalorian has stolen much of the Disney+ spotlight. But he’s not the only helmeted hero on the new streaming service.

The Rocketeer, director Joe Johnston’s 1991 homage to Saturday matinee action serials, has landed on several lists of often-overlooked treasures Disney+ subscribers should rediscover or enjoy for the first time.

Meanwhile, many fans of high-flying, heart-filled adventure have never forgotten the film or the late Dave Stevens’ resplendently retro comic book on which it’s based. They’re sure to welcome Diamond Select’s new Rocketeer Legends in 3D 1:2 Scale Bust as a fitting tribute to a classic flight of imagination.

This latest addition to Diamond’s “Legends in 3D” line of collectible statues brilliantly captures the determined optimism of Cliff Secord. Cliff is the struggling stunt pilot who discovers a stolen Nazi prototype rocket backpack and uses it to fight for freedom instead – and for his girlfriend, beautiful starlet Jenny Blake!

The 10-inch-tall resin bust depicts Cliff in his striking, streamlined helmet. It may “look like a hood ornament” (as Peevy tells Cliff in the movie) but the rudder in its fin makes it essential to control his flight.

Cliff’s upraised chin indicates he’s ready for takeoff. Beneath are the zippered high collar and the brass-buttoned shoulder straps and front flap of his flight jacket. On his back are the twin silver cylinders of the Cirrus X-3 experimental rocket that literally propel him to new heights of excitement.

The Rocketeer Will Not Stay Grounded!

On the bright, colorful comic book page, Dave Stevens’ Rocketeer was an immediate hit. No less a fan than the late Harlan Ellison praised the work as “adventure and affection, melded in just the right way,” according to the Los Angeles Times.

Unfortunately, the movie adaptation flamed out at the box office. But fans of old-fashioned derring-do full of square-jawed good guys, dastardly ne’er-do-wells, stunning damsels in distress, and wish-fulfilling sci-fi gadgets have loved it for more than 25 years. The film’s following has only grown. Its presence on Disney+ should further raise its profile.

Meanwhile, several comic miniseries continuing Stevens’ original masterpiece has appeared in the past decade. And in November 2019, Disney launched an animated series in which the high-powered jetpack passes to a new generation.

Now is the perfect time to showcase Diamond’s Rocketeer Legends in 3D 1:2 Scale Bust in your collection. But this beautiful tribute to a classic action icon is strictly limited to 1,000 pieces. So launch your order toward Entertainment Earth today!