From Acolytes of the Beyond to Elna Zibsara: Star Wars: The Rise of Skywalker Visual Dictionary 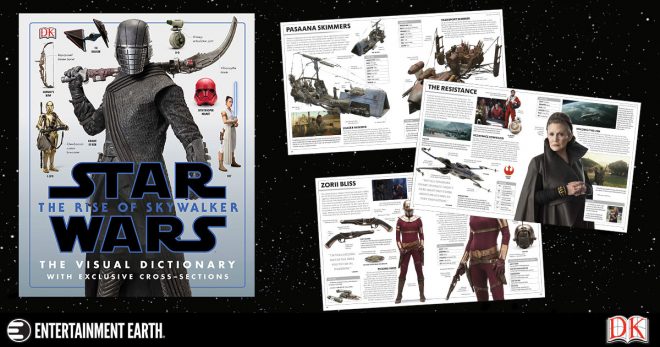 If you’d like to revisit all the characters and creatures, spaceships and settings you saw in Star Wars: The Rise of Skywalker, or get a closer look at strange sights fleetingly glimpsed on screen, or puzzle over plot points you think slipped through your fingers, The Rise Of Skywalker Visual Dictionary Hardcover Book is essential to your library.

The Star Wars: The Force Awakens and Star Wars: The Last Jedi visual dictionaries each ran 80 pages long. This volume runs 200. It has space to fully put The Rise of Skywalker in context as the culmination of the Sequel Trilogy and the Skywalker Saga.

Author Pablo Hidalgo deftly recaps The Force Awakens and The Last Jedi’s most relevant beats, highlighting their narrative and thematic connections to the newest film. And occasional “Legacy” sidebars throughout showcase links to the Original and Prequel Trilogies.

A Lavishly Illustrated Deep Dive into Star Wars: The Rise of Skywalker

The bulk of the book is a lavishly illustrated deep dive into the people, places, and things in The Rise of Skywalker.

If you’re hoping for backstories about major characters that went unrevealed on screen, you won’t be disappointed.

You’ll learn, for instance, how Ben Solo came to lead the Knights of Ren, and more about Zorii Bliss and her “complicated relationship” with Poe Dameron. You’ll also get the scoop on Lando Calrissian’s abducted infant daughter, a revelation casting substantial new light on his interaction with Jannah near the movie’s end.

Seemingly every background and bit player in The Rise of Skywalker gets a name and at least a thumbnail history, too.

Now you can identify all the First Order officers around Kylo Ren’s briefing table. You’ll also meet all the Resistance’s brave fighter pilots and support personnel (including the son of one late, lamented Mon Calamari).

And if exploring strange new worlds is your passion (apologies to that other “star” sci-fi franchise), this dictionary also functions as a handy atlas.

From Mustafar to Exogol, every world in The Rise of Skywalker (except one we already know well) appears here, served up with plenty of tantalizing trivia. (Know why Ajan Kloss, home to the Resistance’s latest base, is personally significant to General Leia Organa? You will!)

Does this wide-ranging Star Wars reference answer every question either casual viewers or ardent fans have? No. Strikingly, for example, Emperor Palpatine receives scant mention. Don’t look here for an explanation of how he came back for one last (?) go-round as the galaxy’s Big Bad. (That said, you may find some enticing hints.)

But let’s face it: Lingering questions and even some measure of creative confusion are hardcoded into Star Wars’ DNA.

Where would the fun in complete explanations and iron-clad consistency be anyway? As my 12-year-old daughter, a committed member of the next generation of Star Wars fans, told me when I complained we still don’t know how Anakin and Luke’s lightsaber came to Maz Kanata, “That just means you get to make up your own story!”

Star Wars: The Rise Of Skywalker Visual Dictionary continues the fine Star Wars tradition of surprising and startling us with things we’ve never seen before, and spurring us on to look for even more wonders in our own imaginations. It’s a beautiful book sure to fuel hours of fun and fantasy.

It will help ensure – as The Rise of Skywalker’s marketing tag line had it – that while the Skywalker Saga is over, the story will live forever.

What revelation from Star Wars: The Rise Of Skywalker Visual Dictionary intrigues or excites you the most? Let us know in the comments below!

Collectibles Fun Collectibles
Related ItemsBookDK BooksEntertainmentReviewStar WarsStar Wars: The Rise of Skywalker
← Previous Story It’s Showtime! Here’s Why This Beetlejuice Bishoujo Is the Ghost with the Most, Babe!
Next Story → You Won’t Believe Our 12 Favorite One:12 Collective Action Figures