Let’s face it: Watching Saturday Night Live (SNL) is a national past-time. With the iconic sketch comedy’s 40th season approaching on September 27th, many are gearing up for a phenomenal season premiere – including the folks here at Entertainment Earth! Let’s take a good look at why this season will be one for the books:

Yes, it all started with the infamous George Carlin quipping controversial jokes on live TV, debuting Saturday Night Live in grand fashion on October 11th, 1975. Since then, SNL has been groundbreaking in the ways of comedy while hilariously challenging the FCC in slapstick fashion and pushing the boundaries of the times.

SNL has won an astonishing 40 Emmy Awards, the most for any show in television history. Additionally, SNL holds the title for the most nominated television show in Emmy history with 171 nominations. The show was honored twice, in 1990 and 2009, with the prestigious George Foster Peabody Award and cited as “truly a national institution.” We couldn’t agree more. With its 40th season closing in, we can’t wait to see what’s next in store for the beloved show.

While SNL tends not to reveal its list of guests performers until the live taping of the show, we can certainly assume with the three-hour Saturday Night Live 40th Anniversary Special set to air February 15th that there will be many cast members new and old making star-studded appearances. Consider Adam Sandler, Mike Myers, Eddie Murphy, Tina Fey, and more who began their careers on SNL. We wouldn’t count them out for a grand appearance at what is bound to be a monumental event in SNL history!

Darrell Hammond will be making his debut as official announcer after the unfortunate passing of the beloved Don Pardo. As Darrell Hammond is a former cast member, it will surely be interesting to see if he has a unique take on the iconic line, “Live from New York, it’s Saturday Night!” 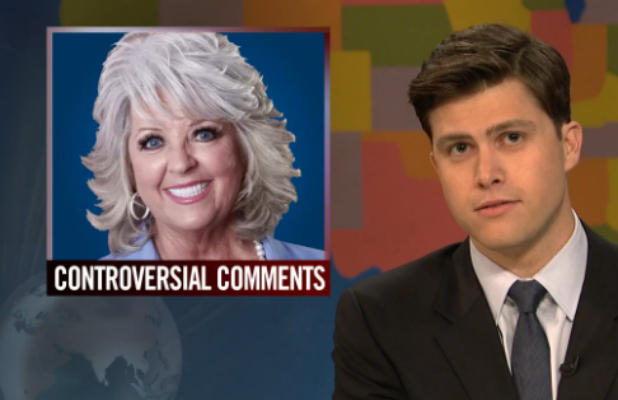 Need we say more? Chris Pratt is hosting the season 40 premiere! The Parks and Recreation star has taken the entertainment industry by storm as of recent with his starring role in the film Guardians of the Galaxy. In the the new promo released by NBC, Pratt faces off with SNL’s Kate McKinnon, making snarky jokes. Oh boy, are there jokes. Jokes about Anna Faris, jokes about Chris Pratt’s newly chiseled body, and his jokes about Pratt’s costars Groot and Rocket Raccoon from Guardians of the Galaxy.

Best of all, McKinnon asks Chris Pratt to open several jars of pickles. “Thank you so much,” she says. “I have a food-based sketch I want to run by you.” “Does it involve pickles?” he asks. She responds quickly with “No, this is my dessert.” Watch the full promo below.

Are you psyched for the 40th season of Saturday Night Live? (We sure are!) Who do you think should host this season? Let us know in the comments below.