5 Characters that Would Make the Worst Easter Bunny

Easter has long been associated with cuteness – pastel colored eggs, baby chicks, and of course, the fluffy little Easter Bunny. But what about those of us who don’t do “cute”? Well, it’s about time to turn the traditional Easter holiday on its ear (pun intended) with these 5 twisted takes on the Easter Bunny.

You may say to yourself “Bugs Bunny isn’t a bad choice for the Easter Bunny!” But if really you think about it what other bunny is more mischievous and warped than Bugs? You can just imagine all the messed up stuff he would make you do just for an Easter basket. (That’s if he doesn’t get lost on his way to deliver it. He should’ve taken a left in Albuquerque.)

If you’ve played the Silent Hill video games, you know how unnerving some of the visuals can be. Nothing is more frightening than the juxtaposition of cute and horrific that is Robbie the Rabbit. As the unofficial mascot of the series, he has appeared in many Silent Hill Easter eggs. But what if your Easter eggs had Robbie’s blood face on them? 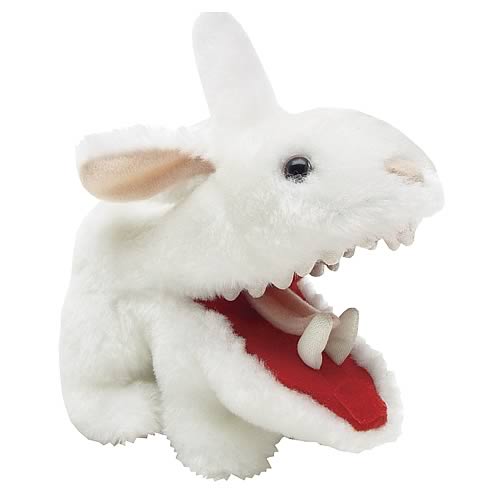 It may look like an ordinary, harmless little bunny but this rabbit has a vicious streak a mile wide! It’s a killer! Not only is this rabbit bad-tempered but he has huge, sharp teeth as well. The upside of having him as the Easter Bunny – if he doesn’t kill you – is you get a lot of neat bones as Easter presents. It’s probably best to take King Arthur’s advice and just “run away!”

Unfortunately, if Frank the Rabbit on shows up on Easter Sunday morning that would mean the world is probably going to end soon – although, if you follow his instructions you might be able to correct the timeline and save the world (so that’s a plus!).

This white bunny with bloodshot eyes may have been a hit in Thailand, but would he be a hit at your Easter celebration? One thing is for sure, you won’t want to be Bloody Bunny’s enemy.

Other twisted bunnies that deserve an honorable mention: The Were-Rabbit (Wallace and Gromit: The Curse of the Were-Rabbit), Rabbit (The Twilight Zone: The Movie), and the Easter Bunny from Hell (Bill & Ted’s Bogus Journey).