It’s that time of year again. When the leaves change colors and begin to fall to the ground. When the weather gets that slight chill in the air. Kids start preparing their costumes for trick-or-treating, and classic horror movies are binge-watched. But the most important thing about this time of year – the new season of The Walking Dead premieres on AMC! Our favorite walker killing band of survivors will grace our screens as we sit on the edge of our seats just hoping and praying the ones we love to make it through the episode. This year when you and your friends gather to watch the opening episode, do so in style with this wide array of collectibles available now!

Each new episode of The Walking Dead is just another opportunity for our favorite characters to be killed off in horrific fashion. And what better way to celebrate their memory than with this miniature cartoonish vinyl figures? The Series 5 Display Case includes 12 individually blind-boxed figures with random variants inserted throughout. It’s a blind draw to which characters you can get, but some of the notable names in this series include Glenn, Abraham, Dale, Denise, Sophia, T-Dog, Merle, Shane, and Andrea.

We’ve all played Monopoly and everyone wants the race car, but imagine cruising around the board as Negan’s weapon of choice Lucille! Now your dream is a reality with this variation of the classic Monopoly board game. Aside from Lucille, the other tokens include Michonne’s Katana, Rick’s Revolver, Carl’s Hat, Daryl’s Crossbow, and a Walker Head. The locations on the board have been changed to match your favorite locations from the series.

Negan’s Bat Take It Like a Champ Edition Prop Replica

Do you find yourself wanting to relive last season’s heartbreaking premiere episode? You know the one where two of our favorite characters were brutally murdered in front of our eyes? Well now you can go back and watch it all over again but this time you can proudly display this replica of a bloodied Lucille. This reproduction includes identical markings and a barbed wire-wrapped barrel end and just to make it more real there’s bloody fingerprints and a blood-spattered paint finish. This replica is the quintessential talking piece in your collection when you have guests over to visit for the holidays. 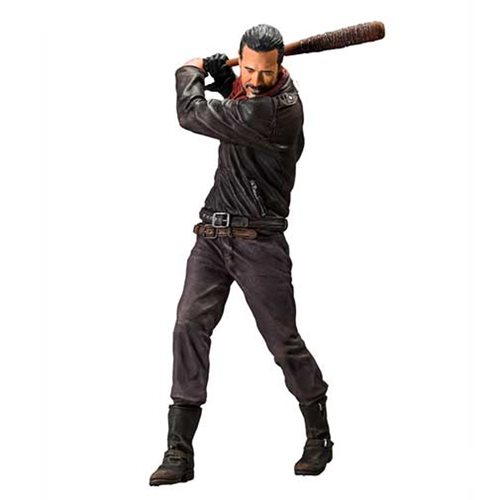 From the moment he stepped onto screen Negan became one of the most notorious yet captivating characters on television. Jeffery Dean Morgan brought to life one of the comics most icon figures and now this life-like figure brings his portrayal on display in action figure form. The figure comes with a scaled Lucille barbed-wire baseball and is designed in Jeffery Dean Morgan’s likeness. It also comes with a black circular base for posing.

When you sit down on Sunday nights to enjoy your favorite zombie drama television series, you’ll want to do so with a refreshment in your hand. What better way than with a The Walking Dead pint glass? This four pack includes glasses for Daryl Dixon, Andrew Lincoln, and two Walkers. Each glass holds 16 ounces of liquid and has a great design.

A memorable scene of Carl sitting on the rooftop eating pudding while will forever be engrained in our minds and now, the pudding has been immortalized in lunch box fashion. Designed to be a replica of Carl’s can of pudding, this lunch tote features an insulated interior, short handle, and zippered lid. The tote measures 7-inches tall and 6 1/2-inches in diameter so it’s assured to fit your lunch with no issue. Eat lunch in true The Walking Dead style.

This is just a taste of all the amazing collectibles from The Walking Dead so get yours now. Don’t be left behind like Rick in a coma, order today!