Collectibles Straight From the ’90s!

The 1990s were a memorable time, especially for fluorescent colored clothing and Zubaz pants (you may need to Google that, kids). It was also a great time to be a kid as it was the glory days of Nickelodeon – if you were lucky enough to have cable in your home. Some of today’s cult classic cartoons began in the ’90s and they’re still just as popular today, if not more popular. But you don’t need Blu-rays of old cartoons to remain nostalgic, we here at Entertainment Earth can you send you back in time with some items directly from the ’90s!

Big clunky magnets. There was a time when they covered most people’s refrigerators. This was before we had smart fridges that tell us what food we’re running low on without having to actually burn some energy to OPEN the fridge door. No, back in the ’90s we had alphabet magnets and large clunky magnets of all kinds of things. Now you can bring those days back! Nothing would look better on your fridge or any other magnetic surface than these Chunky Magnets from Aquarius. Teenage Mutant Ninja Turtles, Rugrats, Rocko’s Modern Life, they’re all here and they can all be yours!

We also had these things called puzzles. It was in a time before iPads or Playstations. The dark ages of technology. We had to use our brains and deductive reasoning to put all the pieces in the right spot to match the picture on the cover of the box. Return to those activities with these Nickelodeon-themed puzzles! Challenge yourself with a Rugrats five hundred piece puzzle! Try not to go all Reptar on the box when you’re sure a piece should fit in a spot that it actually doesn’t. 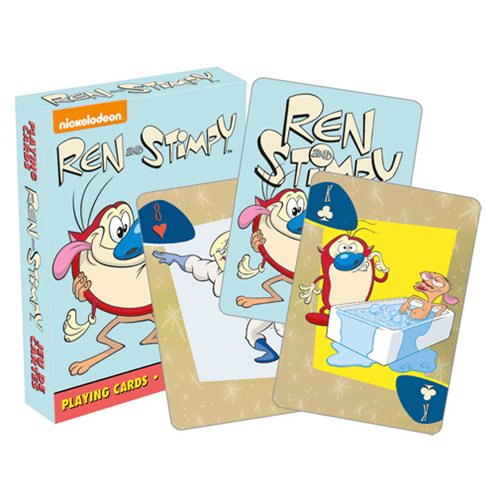 Finally, when it was raining and all your friends couldn’t come out to play or come over to your house, you were stuck using whatever games you had in the house. You could pull out the Monopoly board for the thousandth time, but you just know the piece you wanna play as (the top hat) was missing. Instead, you pulled out a deck of cards and learned how to play Solitaire or got crazy and played Crazy 8’s! Now you can do this all over again but with your favorite Nicktoon characters on the face of the cards thanks to Aquarius (they’re making ’90s kids’ dreams come true). Put away that boring plain set of playing cards and bust out the Ren & Stimpy cards to really wow your friends.

Bring the lovable ’90s back to your home with any and all of these items! But get them now, much like the ’90s, they won’t be here forever!