Alien and Predator Face Off in New Eaglemoss Statues

The Alien Xenomorph statue stands intimidatingly on his hind legs. His arms are outstretched and his deadly tail is poised behind him ready for the next attack. At the Xenomorph’s feet lies a lone baseball cap, most likely all that remains of his last victim.

The Predator statue holds a spear aloft in victory, the head of a Xenomorph foe gored upon it. Scar, the Predator protagonist introduced in Alien vs. Predator, is clad in traditional garb. His mask is fixed upon his face and his name sake, caused by Xenomorph acid, is marked upon it.

Each statue is meticulously rendered to 1:21 scale, standing approximately 3 3/4-inches tall. They are both also cast in metallic resin and hand painted.  The Alien Xenomorph Statue comes with Collector Magazine #1, while the Predator Statue comes with Collector Magazine #2. Both companion guides explore and provide more details on their respective creature.

You can enjoy these fearsome foes when they become available in April 2017. Place your pre-orders with Entertainment Earth now! 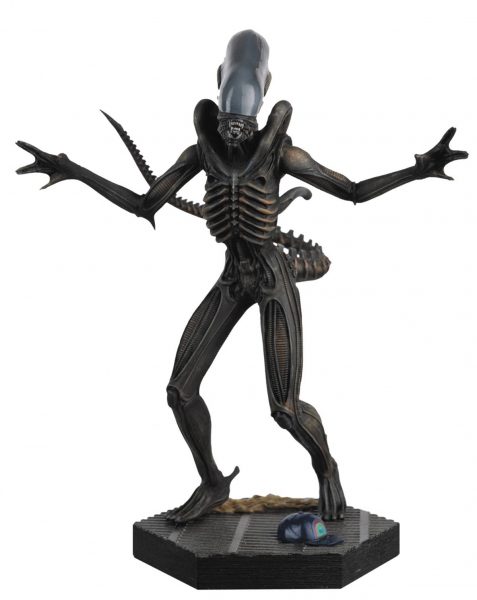 Collectibles Statues
Related Items1:21 ScaleAlienAlien vs PredatorAliensEaglemossPredatorStatueXenomorph
← Previous Story Join the Magical Quest for the Dark Crystal with New ReAction Retro Action Figures
Next Story → Harley and the Joker Lend a Hand in This Nifty Set of Statues