I’ve been a fan of the Alien franchise ever since I first rented a VHS copy of the original film as a pre-teen. This movie had everything I wanted and more, from a badass female lead in Ellen Ripley, to a creepy and groundbreaking movie monster in the Xenomorph. I was enamored with this new universe and quickly rushed out to rent the sequels (I unabashedly love all of the sequels, even Resurrection. I also enjoy the Alien vs. Predator spin-off films).

My passion for these films is still strong to this day and they’re some of my favorites to re-watch over and over. What better way to celebrate this beloved series than by counting down my top favorite Entertainment Earth collectibles in honor of Alien Day!

One of the aspects that I love most about the Xenomorph’s is just how damn cool they look. With their slinky frames and giant, eyeless heads, they’re scary enough to stop just about anyone dead in their tracks. This particular Xenomorph action figure is a Lurker, meaning he uses his agility to outsmart his prey. This form of attack requires a thin, spindly figure, which this guy obviously has in spades. Standing approximately 4-inches tall, this figure also includes three sets of hands and a Facehugger.

Definitely the most iconic scene from the franchise (and perhaps in movie history) is the first appearance of a Chestburster escaping from Executive Officer Kane’s ribcage. A sequence so alarming that the horrified reaction you see from his crewmates is entirely real (director Ridley Scott didn’t let the rest of the cast in on just what was about to happen). This figure features Kane in his white uniform with the iconic creature protruding from his chest in a sea of blood. Featured are approximately 5 points of articulation, and period-authentic blister-card packaging. This collectible is recommended for ages 17 and up.

3. Alien 35th Anniversary A Friend To You by Laurie Greasley Lithograph Art Print 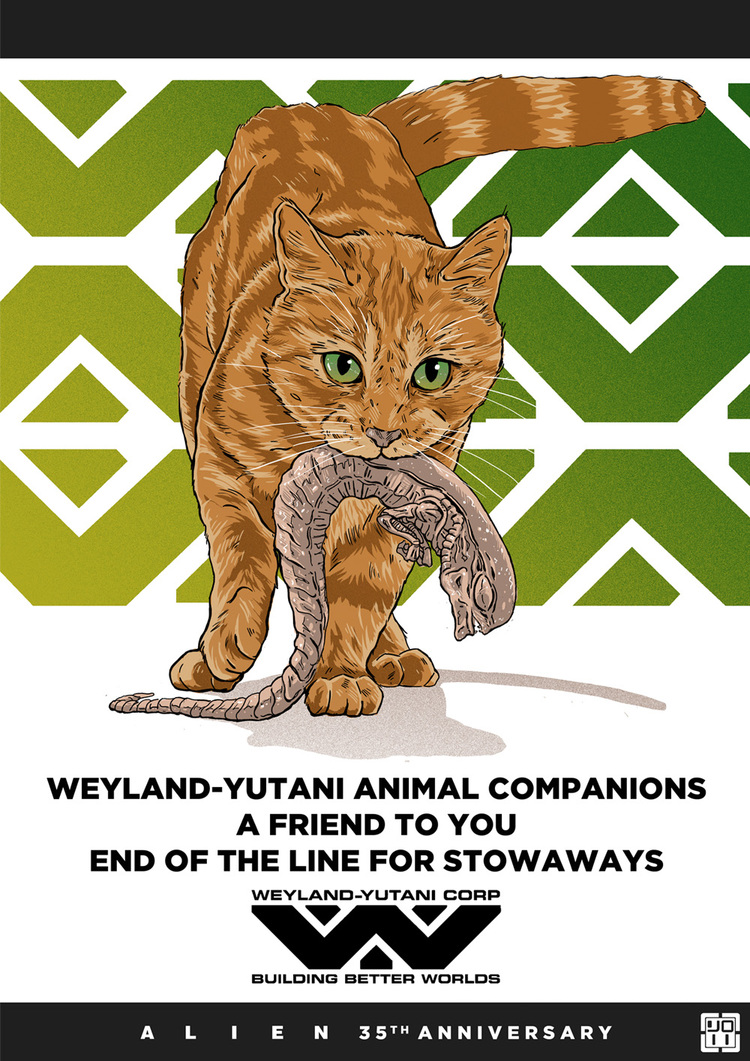 Dogs may be a man’s best friend, but cats will straight up murder for the select few they love. Jonesy the cat was an unsung hero of the Alien films, staying loyally by Ripley’s side and providing comfort after particularly bad PTSD episodes. This beautiful and quirky lithograph features the Ginger Tom proudly carrying a dead Chestburster in his jaws. Jonesy’s job on the USCSS Nostromo was to catch vermin, and I think we can all agree that he did a fine job here. This art print is limited to 395 hand-numbered pieces and comes complete with a certificate of authenticity. It measures 24-inches tall x 18-inches wide.

This collectible is a true work of art! I can’t get over the amount of detail that went into crafting this piece. I want this prop to decorate my house all year round and provide endless hours of entertainment. Standing almost 36-inches tall, this full-sized replica features articulated flaps with a wire armature allowing you to actually open the folds of the egg! Also included is a full-sized Facehugger that can’t wait to just give you a big hug (on the face). The Xenomorph Egg stands on its own and is made of detailed, hand-painted foam. A switch is located inside the base that activates the LED lights creating a spooky orange glow. Requires 3x “AAA” batteries, which are not included. This product is recommended for ages 17 and up.

I’m a sucker for anything cuddly, and this Chestburster Plush simply makes my heart melt. Just look at those tiny arms! And that wide open jaw set in a silent scream! I would be the first to kick the bucket in a Xenomorph infestation, as I’d be chasing after this guy demanding hugs with little regard to my own personal safety. This soft plush measures 48-inches long and features a wire running inside from head to tail. This allows for maximum poseability; he can even stand up on his own! This collectible is a 1:1 scale plush replica of the original Aliens Chestburster and is recommended for ages 3 and up.