If you’ve never owned an anime statue, you’re missing out. If you are an anime/manga or video game fan, then you know how amazing a statue looks in your collection. That’s why we’ve put together a list of anime statues that are perfect for displaying on your desk or shelves.

The massive 1:5 scale piece is designed for adult collectors and features select removable parts. It’s plastic, so it’s going to look fantastic, just like the other statues from Orchid Seed. 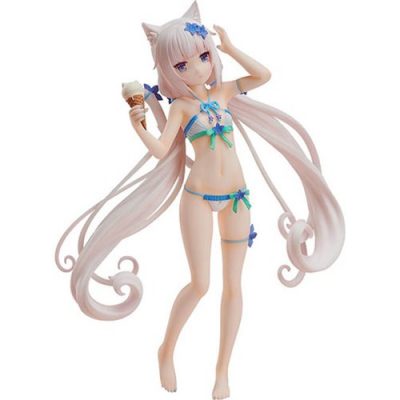 From the Nekopara video game series, comes an S-style figure of La Soleil’s poster girl – Vanilla! The lovely girl’s costume is based on a specially drawn original illustration by Sayori, and the sexy design of her swimsuit and the various Chinese bellflower decorations have been faithfully recreated.

From the visual-novel game, Nekopara which depicts your life together with super cute humanoid cats comes the Nekopara Coconut 1:4 scale anime statue! Illustrator Sayori has provided an original illustration, which has been faithfully transformed into this figure.

Next in the 1:4 scale statues from Nekopara comes, Azuki. Based on illustrator Sayori’s original illustrations, this statue also comes with a Patisserie Soleil uniform, which is made of actual cloth.

Based on the anime, Highschool DxD Hero DxD HERO, this rerun statue of the character Rias Gremory comes with an additional upper body and necktie. This anime statue has both head and arm articulation.

Make sure to check out Entertainment Earth for the latest statues for your anime, manga, or video game collection.

Collectibles Statues
Related ItemsAnimeFeaturedmangaStatuesVideo Games
← Previous Story King of the Monsters: A New Generation of Godzilla Toys
Next Story → Why These Schitt’s Creek Products Will Keep Your Fandom Going after the Finale