Captain America Needs YOU… in This Jacket!

Captain America has always had a distinctive looking costume. Red, white, and blue – as patriotic as you’d expect. His attire in the film adaptations has both the vintage 40’s feel and a very modern biker look as well. If you’re like me, you’ve wanted to live your life as Steve Rogers because let’s be honest, he’s the quintessential good guy. While we can’t upgrade our abilities with a super soldier serum, now we CAN look like Cap with this amazing Captain America: Civil War Captain America Costume Jacket!

While he’s never been one to be concerned with the ways of fashion in any generation, Cap always looks good. His uniform has always been practical and sensible, allowing him the freedom to fight off Nazis and anyone else who would threaten innocent people. Steve is a symbol of freedom and strength and it’s a symbol you can wear.

The jacket jumps off the screen and onto your torso in a wide variety of sizes. The detail of the jacket is incredible, from the star logo on the chest, to the harness, to the Avengers patches on each shoulder; you’ll feel ready to take on HYDRA the instant you slip this baby on! The jacket was recreated from the original screen-used production assets so it’s about as close to the real deal as possible.

The costume jacket is available for pre-order now. 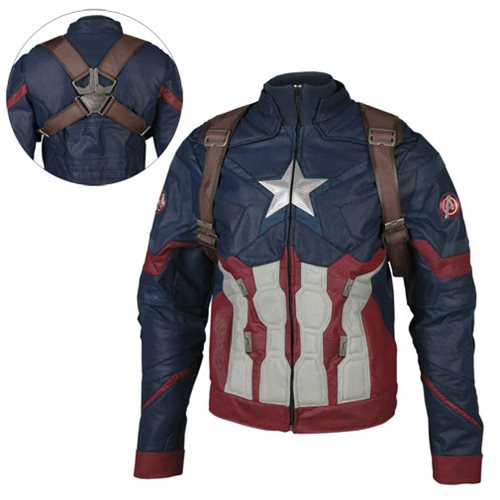