Bring the Battle for Atlantis Home with the Best Aquaman Collectibles

When Aquaman opens in theaters on December 21, audiences will see Arthur Curry and the underwater kingdom of Atlantis he rules as never before. And you can add all the excitement of this big-screen splash to your collection with selections from the haul of Aquaman toys and collectibles we’ve reeled in on Entertainment Earth!

You Will Believe Aquaman Can Smile 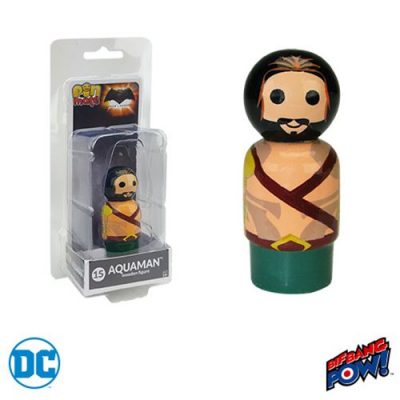 Despite its tremendous box office haul (over $873 million worldwide), Batman v Superman: Dawn of Justice didn’t win unanimously rave reviews. But even though he was onscreen for only a few fleeting moments of its runtime, Jason Momoa’s new version of Aquaman did make comic book fans and general audiences alike sit up and take notice.

It’s also unique because it’s one of the rare representations of this brawny, broody Aquaman with a bright smile on his face! Recapture your childhood love of the oceanic “super friend” with this charming take on his current incarnation.

The Once and Future King of the Seven Seas

Here he is as his true fans have always seen him: awe-inspiring and awesome!

This spectacular DC Gallery Aquaman Movie PVC Statue stands 9-inches high. It’s a finely painted piece – meticulously sculpted by Rocco Tartamella, after designs by concept artist Mark Wong – capturing Aquaman in a heroic pose, wielding his mighty trident against any who would oppose him and threaten the realm of Atlantis.

Let Aquaman guard your display shelf or desk with the same nobility and purpose!

Not even a snarky Bruce Wayne will laugh after Aquaman “talks to fish” in this winter’s blockbuster movie! Relive the onscreen, deep sea adventure with the Aquaman Movie 6-Inch Aquaman with Warrior Shark Action Figure from Mattel.

The 6-inch, articulated figure of Atlantis’ true sovereign himself not only carries his formidable trident into battle but also comes with a projectile-firing battle suit. And the 18-inch shark he can ride has a movable fin and a mouth that, when opened, reveals teeth sharp enough to put Jaws to shame.

It’s Not Easy Being King

When rendered in traditional tiki style, the Aquatic Ace looks like he’s feeling stressed. Maybe the pressures of ruling the depths and their denizens are finally taking a toll?

But whatever duress Aquaman may be under, you’ll feel nothing but waves of relaxation as you sip your favorite beverage from Beeline’s Aquaman 16 oz. Geeki Tikis Mug. It sports the swimming superhero’s traditional colors (yellow outside, green inside), and – what a relief! – is safe for both your microwave and your dishwasher’s top shelf.

When Mera Rules the Waves

In the Bombshell continuity, Mera is the Queen of Atlantis, and also an ally of Great Britain’s navy during World War II. This 6-3/4-inch DC Bombshells Mera Action Figure features her in a fetching sailor suit. Her accessories include three interchangeable pairs of hands and her magical trident.

Move over, Britannia – time for Mera to rule the waves!

Don’t miss out on adding any of the best Aquaman collectibles, toys, and other merchandise at Entertainment Earth to your collection!

What are you looking forward to most about Aquaman’s big movie? Let us know in the comment section below!