Star Wars: The Rise of Skywalker has revealed Kylo Ren’s destiny (never fear, no spoilers here). Star Wars fans will be discussing and debating his place in the parade of the franchise’s villains for years to come.

Whatever your opinion of the leader of the Knights of Ren and the First Order, you’ll want this dramatic Kylo Ren statue to have a prominent place of honor in your Star Wars collection!

The former Ben Solo is the newest addition to Kotobukiya’s line of dramatically posed, intricately detailed Artist statues. A companion piece to “Descendant of Light,” the company’s collectible statue of Rey, the “Cloaked in Shadow” ARTFX Artist Series Kylo Ren statue is a tremendous depiction of our heroine’s dark counterpart.

Japanese manga artist Kamome Shirahama is the creator of the fantasy series Tongari Boushi no Atelier [Witch Hat Atelier], as well as a frequent cover artist for both DC Comics and Marvel – including the latter’s Star Wars titles.

No wonder, then, that she has produced such a compelling portrait of the Sequel Trilogy’s “supervillain.”

Her rendering of Kylo Ren doesn’t bear much literal resemblance to Adam Driver, but it expertly captures the character’s intense inner conflict. Though garbed in classically sinister trappings, he cannot completely conceal the innocence and goodness he wants so desperately to rid himself of forever. 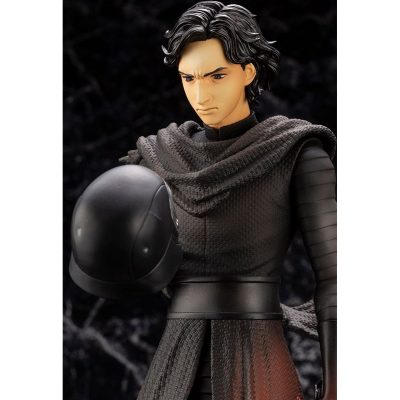 Standing about 11-inches high, Kylo Ren cuts a dashing if not menacing figure, his black robes, and capes swirling around him. In his left hand, he grips his immediately identifiable crimson, crossguard lightsaber. In his right, he holds his distinctive, chrome-faced helmet – except when he’s holding the charred and melted mask of Darth Vader, which also comes with the statue and which you can swap out for Kylo’s (whenever you feel like finishing what the Dark Lord of the Sith started!).

Each statue comes with a print of Kamome Shirahama’s “Cloaked in Shadow” concept art, allowing those who view the piece in your collection to admire how faithfully Kotobukiya has realized the artist’s vision.

Whether you display it on its own or as part of a powerful pair with the Rey statue, you’ll want Kotobukiya’s “Cloaked in Shadow” statue of Kylo Ren to occupy a bright spotlight in your Star Wars collection!