Spoiler Alert! There is some major Attack on Titan plot points ahead! If you haven’t read the manga and you aren’t caught up with the anime – you may want to just cruise over to the new Attack on Titan Funko Pop! Vinyl Figures on our site instead of reading this article.

I’m extremely excited about two things that happened this month… Firstly, after four years of waiting, Attack on Titan season 2 is here! Shortly after that, new Attack on Titan Funko Pop! figures went up for pre-order! That’s a lot of excitement in such a short amount of time for this anime fan.

Back when Funko released their first wave of Attack on Titan vinyl figures I was not caught up with the anime or the manga and a Pop! totally spoiled the big reveal for me with the Eren Yeager Titan form vinyl figure! Now I’m here to pass that on to someone else… Because that’s what evil little anime fans like me do. We’re terrible. At least I warned you first, right?

First up we have the Levi Ackerman Pop! vinyl. Fans have been begging for this one since the initial release of the first wave and Funko has now delivered. By “now delivered” I mean they will deliver around June 2017, but you know what I mean… He is available in full-sized Pop! form as well as a Pocket Pop! key chain. Of course, he is wearing his normal Survey Corps uniform and he has his calm almost expressionless face.

Next up we have Annie Leonhart in her usual uniform, though honestly, a sweatshirt outfit chase would have been so awesome! She’s available in regular Pop! size and as a Pocket Pop! key chain.

OK, OK, OK. I know you’re sitting there wondering where the heck these spoilers are… Well, here they come!

Funko also released an Annie in Titan form Pop! vinyl figure! Funko isn’t calling it the “Annie Titan form,” probably in the name of spoilers but it’s totally her! You can tell by the markings on her face and her white hands. That’s so Annie… This Pop! measures in at 6-inches and matches the size of the previously released Colossal Titan. 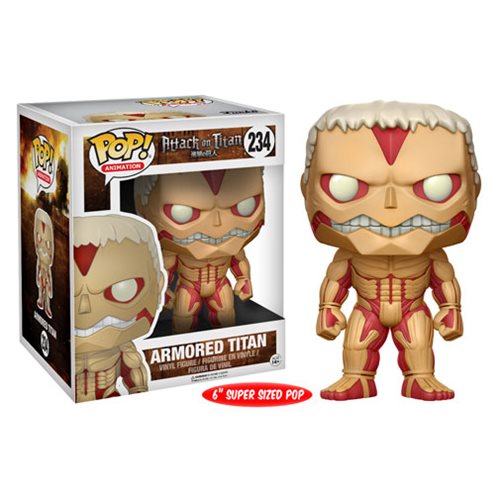 Lastly, they announced the Armored Titan 6-inch Pop! A.K.A Rainer Braun! Funko also doesn’t call this out but you can see that is him from his familiar haircut and red triangle marking on his forehead.

A lot of the first wave Attack on Titan Pop! Vinyl Figures are harder to find these days so make sure you pre-order these now!