You Seek (Baby) Yoda! The Scoop on The Mandalorian’s Hottest Toys

Forget Porgs. “Baby Yoda” toys are here. And love them, you will!

Unless you’ve been living in a slimy mudhole, you’ve seen the “Baby Yoda” memes, the GIFs, the trending hashtag… even this New Yorker “Baby Yoda” cartoon!

The breakout star of The Mandalorian – the first live-action Star Wars TV series and current flagship offering of the Disney+ streaming service – is a blanket-bundled little tyke in an anti-grav bassinet who looks for all the rootleaf stew in the swamp-like he (or she?) belongs to the same species as Yoda.

(And, for that matter, blink-and-you’ll-miss-her Yaddle from Star Wars: The Phantom Menace… but no one’s calling this kid “Baby Yaddle!”)

Given how big this little green guy has hit, you’d think “Baby Yoda” merchandise would be as plentiful as sand on Tatooine.

But only now, more than a few weeks after The Mandolorian debuted, are “Baby Yoda” apparel and accessories making it to market, with promises of other toys and collectibles on the way.

Let’s face it: The House of Mouse isn’t known for passing up chances to monetize its intellectual property.

So what took “Baby Yoda” merch so long?

So Cute He Made Werner Herzog Cry

That great disturbance in the Force you felt on November 12 was millions of voices suddenly crying out in tenderness when The Child was revealed at the end of The Mandalorian’s first episode: “Ooooh, he’s so a-DOR-a-ble!”

Sure, the Galaxy Far, Far Away has shown us some cute and cuddly denizens before. Endor’s got Ewoks. Ahch-To has the Porgs. But “Baby Yoda” is definitely the franchise’s Chosen One when it comes to cuteness.

Even Werner Herzog, the highbrow director, and actor who plays the Mandalorian’s client told GQ the puppet is “heartbreakingly beautiful… It made you cry when you saw it.”

“Restraint from the People Footing the Bill”

“I have to thank Disney and Lucasfilm,” series creator and co-executive producer Jon Favreau recently told Entertainment Tonight‘s Ash Crossan, “because the way the cat usually gets out of the bag with that stuff” – i.e., instant fan-favorite stuff like “BABY YODA!” – “is merchandising and toy catalogs… They really backed us up, because we really wanted to have it be that you had to watch it yourself, so that every time you watch the show, there are new twists and secrets that come out.”

Favreau continued, “That requires a lot of restraint from the people who are footing the bill, saying they’re going to hold back on certain things so that the public doesn’t know ahead of time. Part of that was holding back on some of the merchandise.”

Clearly, they did. Such marketing restraint is admirable, especially in a franchise that has, from its beginning, been eager to capitalize on its “toyetic” elements.

Like Obi-Wan keeping Padme’s babies away from Darth Vader, The Mandalorian team was wise to hide “Baby Yoda” from us – and now their success is complete!

Now that “Baby Yoda” is the year’s hottest alien, all the fun merch can begin.

We all know that the toy form The Child must take is a plush doll. And Mattel has you covered with this The Child 11-inch plush.

Not to be outdone, Funko has also released two The Child Pop!s, one regular-sized Baby Yoda and one 10-inch super-sized Pop! 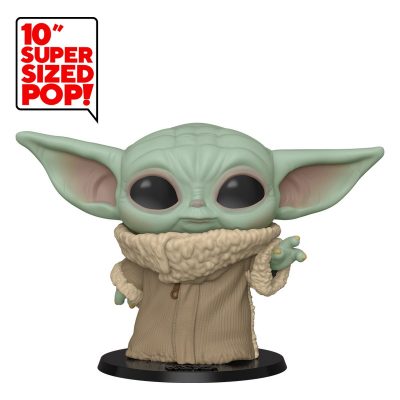 Here’s a look at what Hasbro is hoping “Baby Yoda” boosters will start tracking down via pre-order starting now (no special fobs required).

Baby Yoda’s already given viewers so many precious, meme-worthy moments – OMG, he’s sipping a cup of soup, that’s a-DOR-a-ble! – and these 2 1/2-inch permanently posed figures capture them for your collection in three different two-packs.

One set pairs the soup sip that broke the internet with “Baby Yoda” snug in his blankie; another shows him snacking on a frog and using the Force; and the third, “Baby Yoda” with his ball toy and his heartbreaking “don’t leave” scene. (No, you’re crying!)

If while watching Chapter 5, “The Gunslinger,” you felt annoyed because Peli Motto (played by Amy Sedaris) got quality snuggle time with “Baby Yoda” and you didn’t, then this plush doll is for you!

He stands a sweet 7-1/2-inches tall, is wearing his cuddly cute robe, has poseable arms – perfect for giving hugs or wielding the Force, as circumstances warrant – and makes heart-melting baby sounds when you squeeze his soft body.

The Child Talking Plush Toy also comes with his very own bone broth bowl and frog (because sometimes soup just won’t cut it).

Size may “matter not,” but for fans who think “Baby Yoda” is cute and all but just too darn little, here’s a 6 1/2-inch action figure ready for plenty of pose-and-play fun.

With multiple points of articulation and screen-accurate detail, only on a slightly larger scale, this toy is sure to top the “most wanted asset” list of any figure-collecting fan of The Mandalorian.

His premium articulation, allowing him a superior range of mobility? Check. The meticulous attention to on-screen detail, including the accessories (broth bowl, toy ball, and frog)? Of course. Such things are the hallmarks of Hasbro’s Black Series line. Serious collectors like you demand nothing less.

He may look like “Baby Yoda,” but this lovable creature is called The Child — and now you can become his protector with this animatronic toy from Star Wars. Touching the top of The Child Animatronic Edition’s head activates over 25 sound and motion combinations, including happy and excited sounds, giggles, babbles, and more, all while the figure’s head moves up and down, ears move back and forth, and eyes open and close. Boys and girls ages 4 and up can pretend to harness the power of the Force as The Child toy closes its eyes, raises its arm and sighs as if exerting a great amount of energy. Includes The Mandalorian pendant.

Shrouded in mystery, Yoda and his species long have been. How much, if any, The Child will add to our knowledge of Yoda’s kind remains to be seen.

What’s no mystery is that Entertainment Earth will be ready to fill all your “Baby Yoda” toys and collectibles needs, not to mention other merchandise celebrating The Mandalorian. Always in motion, the future may be… but always here your browser should be pointed!

What’s your dream piece of Baby Yoda merch? Tell us in the comments below!

Collectibles
Related ItemsBaby YodaFeaturedStar Warstoys
← Previous Story Don’t Wait Too Long before You Get These Cute BTS Mini Dolls
Next Story → How Many Ricks Does It Take to Get to the Center of the Multiverse?