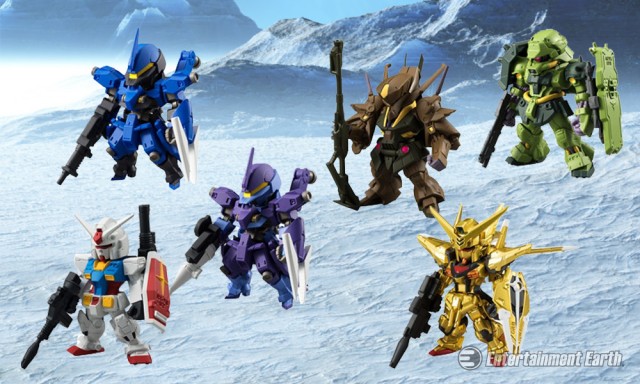 The Gundam franchise established the world of giant robot anime back in 1979. Still going strong, Gundam shows a realism of design and weaponry that other anime genres can’t begin to close in on. Now, Bandai is bringing their third series of Gundam Converge figures to the marker with this Gundam Converge #3 Action Figure Box 10-Pack.

These figures take the mechanics and design of the larger than life robots in the Gundam universe and they shrink it down to a manageable 2.2-inches. If that sounds implausible already, then hold on to your hats, because the level of detail on these figures is completely impossible! There are interchangeable parts, microscopically detailed weaponry, and a faithfulness of style rarely seen in the action figure industry.

This is the set that you don’t want to miss. This set features the main Gundam from Gundman: The Original, Akatsuki, complete with the Oowashi pack! This pack also features Schwalbe Graze, Geara Doga, and Gabthley.

The world of realistic humanoid robots owes a lot to Gundam. This third series of Gundam Converge brings all the excitement and every last detail home to you, fitting in the palm of your hand. You can pre-order your set today with free shipping from EntertainmentEarth.com!