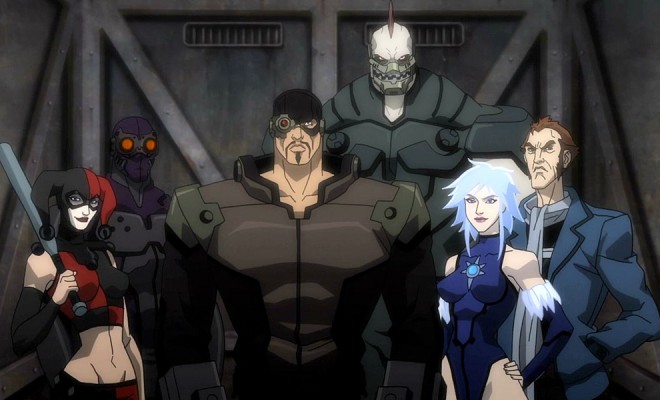 Batman: Assault on Arkham has been released on DVD by Warner Bros. Pictures. In anticipation of this direct-to-video release, Warner Bros. released a video short from the film. The world premiere of this exciting movie occurred at San Diego Comic Con 2014. The animated film is set in the Arkham video game universe and occurs after the story of Arkham Origins.

Assault on Arkham focuses on the story of the Suicide Squad, notably Deadshot and Harley Quinn, as they break into Arkham Asylum to complete an assassination of The Riddler. The criminals who comprise the Suicide Squad face off against Batman and Arkham’s inhabitants. Meanwhile Batman must find and disable a bomb planted by The Joker.

The story opens with Batman rescuing The Riddler from a black ops assassination. After The Riddler is returned to Arkham Asylum, the Suicide Squad is formed by Amanda Waller in order finish the job. With bombs implanted at the base of their spines, the members of the Suicide Squad have no choice but to comply. Comprising of Black Spider, Captain Boomerang, Deadshot, Harley Quinn, Killer Frost, and King Shark, the Squad deploys to Gotham City where the Penguin will provide them with equipment. With Harley Quinn on the inside of Arkham Asylum, the remaining five Squad members infiltrate in disguise.

The released short is a minute long segment focused on Deadshot. He engages in a not too friendly game of darts in a bar before walking out. This short preview doesn’t reveal the overall story but does introduce the film’s gritty tone.

What do you think of Assault on Arkham? Share your thoughts in the comments!