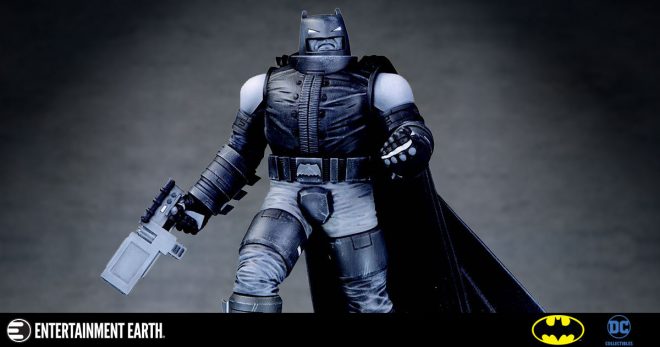 This Batman Black and White Armored Batman by Frank Miller Statue depicts the Dark Knight in one of his darkest moments. Based on the iconic artwork from Frank Miller’s unparalleled 1986 series, The Dark Knight Returns, this grim depiction of our gravest hero is brought into full glory in 3D. Armed to the teeth and ready to take on any challenger, you will have to be bold to get a hold of one of the only 5,000 pieces made.

This statue, standing over 7-inches tall, captures the dystopian world found in The Dark Knight Returns, while highlighting Batman’s technological resources. Sculpted in vivid black and white, there is no mistaking this limited-edition collector’s piece as anything other than a work of art on its own. Wearing the same armor that he donned to take on The Man of Steel in the epic finale of the series, this is perhaps the ultimate embodiment of Batman’s power.

Frank Miller’s artwork lends itself to this epic depiction of the Dark Knight. With each piece hand-numbered, this statue is an absolute must for any serious Batman collectors. Once this statue hits the shelves, it won’t be there for very long, so order yours today from Entertainment Earth.

Collectibles Statues
Related ItemsBatmanBlack and WhiteDC CollectiblesStatue
← Previous Story Birds of Prey Funko Pop! Exclusive Collector Cards Are a Must Have
Next Story → Did You Know That Bruce Lee Would’ve Turned 80 in 2020?