Batman Action Figures and Collectibles: A Cornerstone of Pop Culture

The Batman is celebrating another year as the Dark Knight of DC Comics. One of the ways us fans immortalize this character is through the collection and admiration of toys and collectibles.

Starting in the 1940’s, the Caped Crusader’s stardom grappled to the highest rooftop in his years with National Publications (DC Comics today). The initial Batman collectibles that came out where few and far between, the first being metal figures won as county fair prizes. But once the highly popular television series Batman starring Adam West and Burt Ward hit the airwaves, a merchandising frenzy dubbed “Batmania” began; it made this comic book figure a pop culture icon. Ever since, Batman has been molded in the form of action figures, toys, bobble heads, and collectibles all for placing in your personal Bat-collection in the comfort of your own Batcave.

To commemorate this year’s Batman Day, let’s take a journey through the most popular Entertainment Earth Batman toys and collectibles over the last decade, giving us an inside look at a history of this dynamic figure and why these toys illustrate the Batman’s true home within the cultural zeitgeist.

In 2006, writer Grant Morrison’s run in comics had taken full force, beginning the now classic arc “Batman R.I.P.” Illustrator Andy Kubert returned the black and grey color scheme of the Batsuit, large squared pocketed utility belt and sleek Bat-emblem to complement his even sleeker gadgets, all of which can be seen in one of 2006’s best selling collectibles.

Clearly inspired by the comics of that year, the Batman 13-inch Deluxe Collector Figure features a cloth costume along with 4 uniquely styled Batarangs, all together in an eye catching four-color window box with a fifth panel. Whether you keep this Dark Knight in the display case or proudly standing upon your desk, there wasn’t a finer figure of such stature, making it a clear contender for one of the most popular batman collectibles a decade ago.

Even though the live action TV series Batman really started the Caped Crusader toy craze, there wasn’t as many collectibles made as we see today. There were no prop replicas, or statues, especially ones featuring the colorful rogues gallery and more importantly, Batman’s vehicle, the Batmobile.

Only given three weeks to complete this now iconic car, custom cars genius George Barris transformed the $250,000 1955 Ford Lincoln Future into a car fit for a man dressed like a bat. From the bullet proof Bat-fins to the Batscope on the dashboard to the car’s amazing ability to make an emergency ‘Bat-turn’, The 1966 Batmobile has become just a part of pop culture as today’s celebrated hero.

Due to licensing struggles, once the show ended, the rights to continue this merchandising were fuzzy, making it almost impossible to see new collectibles from this TV show up until 2013 (which we discuss later). It is not surprising that when Hot Wheels made Barris’ Batmobile in 2007, it would literally drive off the shelves and into the collections of fans everywhere. The 1:18 scale replica created by Mattel’s artisans may be small, but it definitely brings back the larger than life presence this Batmobile had 50 years ago. 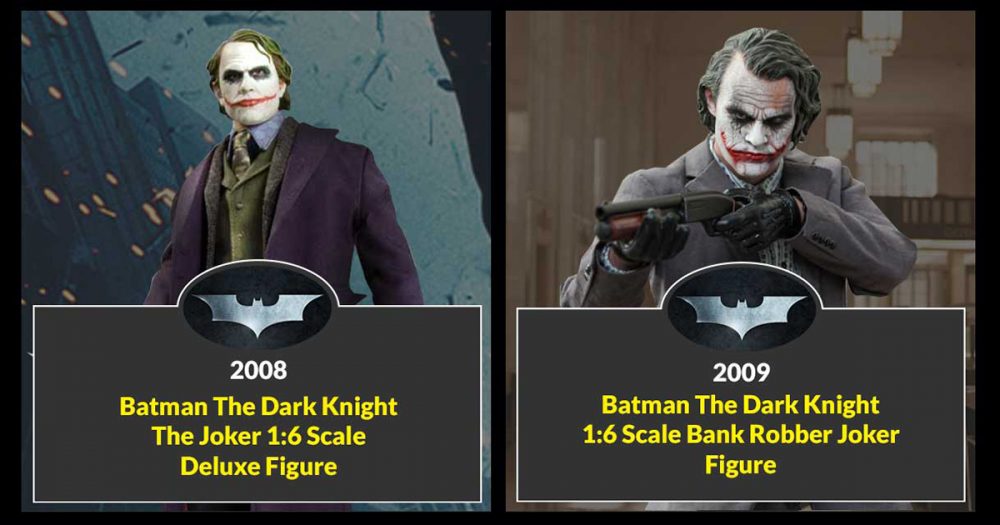 Heath Ledger’s performance as the Clown Prince of Crime in 2008’s Christopher Nolan film The Dark Knight not only earned him a posthumous Academy Award for Best Supporting Actor but also the title by many critics and fans alike as the best Joker interpreted on the big screen.

The same year of Nolan’s blockbuster hit, a 1:6 scale figure of Ledger’s chaotic and intimidating Joker was released, bringing this menacing rogue right into your personal Batcave, something even the Dark Knight himself would think twice about doing. But fans would take that risk to have this 13-inch tall figure featuring 28 points of articulation and authentic costume, from the style to the fabric. These highlights plus the uncanny resemblance of Heath Ledger all come together in a collectible packaging. The sinister and life-like expressions on this realistic figure was icing on the cake to make this Batman toy the top selling in 2008.

The first sequence in Christopher Nolan’s 2008 film The Dark Knight introducing Heath Ledger’s Joker is still one of the most discussed moments in the Dark Avenger’s movie history. In 2009, fans were still clamoring for The Dark Knight collectibles and sought out this 12-inch figure.

Accompanied by an assortment of accessories, from the gloves to his gun to the clown mask paying homage to Cesar Romero’s Joker in the 1966 Batman television series, this figure captures the essence of this pivotal opening scene. Nolan’s Joker once again presents as a life-like collectible, from the facial expressions to the authenticity of the clothing fabric, adding another level of beautiful terror to your collecting in the Batcave. 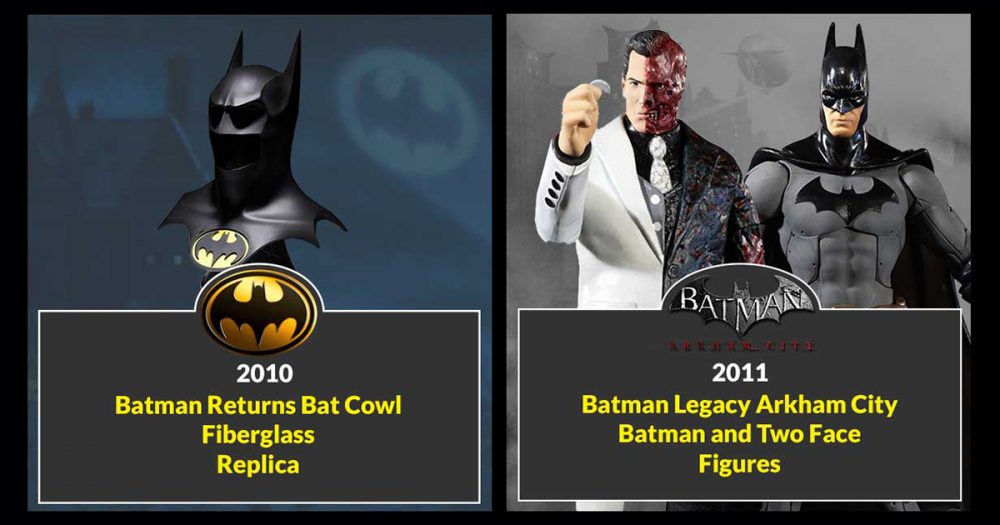 Tim Burton’s sequel film, Batman Returns, starring Michael Keaton as Bruce Wayne resurrected the Gothic aesthetic Bob Kane and Bill Finger created for the Bat-Man back in 1939. With villains The Penguin (Danny DeVito) and Catwoman (Michelle Pfeiffer) challenging both superhero and the man behind the cowl, Batman Returns remains a classic in our hero’s long cinematic history. One of the most memorable aspects of Burton’s film was the Batsuit, returning to its black on black look and separating itself from the bright Adam West suit from the late 1960s.

In 2010, Burton fans and Bats enthusiasts could own an amazing replica of Keaton’s Batman Returns cowl. A limited edition piece with only 500 created, the cowl was made based on the actual cowl Keaton wore in the film. Standing at 24-inches tall it gracefully sits on a utility belt-style display stand and is made out of sturdy fiberglass. The Burtonverse almost turning 20 years old back in 2010, this replica cowl of one of the most celebrated Batman was an easy choice as the next addition to many Batman collections.

In 2009, acclaimed writer Paul Dini penned an original storyline for the now, award-winning video game franchise Batman: Arkham Asylum and its sequel in 2011 Batman: Arkham City. Some of the aspects that continue to make this game series one of the best for the Dark Knight are the exploration of both scenic Gotham City and his infamous rogues gallery.

Arkham City effortlessly was dubbed Game of the Year, spawning merchandise in 2009 such as this 2-pack 6-inch tall action figure set starring The World’s Greatest Detective and his enemy Two-Face, a complex character that has obsessed over duality and fate for over seven decades. Matching well with other DC Universe Classics and Batman Movie Masters figures, with many points of articulation you can re-create your favorite scenes from the Batman: Arkham saga or create new ones showcasing the Masked Man-hunter’s heavily layered mythology across all media, including video games.

With the likeness of Anne Hathaway, this statue exudes the purr-fect persona of this 76-year-old anti-hero and at times love interest for our brooding Caped Crusader. Crouching like the embodied cat she truly is, fans of the Cat and of Nolan’s outstanding realistic universe were clawing their way to make this part of their Dark Knight collection.

Created to parody the Black and White serial films Columbia Pictures released in 1943 and 1949, producer William Dozier brought the newest series about the Dark Knight in 1966 to both entertain the younger and older audiences, and it became an overnight sensation. Adam West, who played Bruce Wayne, brilliantly represented this legendary hero to both readers of the comic books and fans of this POP art filled prime-time television adventure. For many Adam West became the quintessential Caped Crusader but do to licensing issues it took decades for a plethora of Batman ’66 merchandise to return after the series’ cancellation in 1968.

In 2013, Adam West finally returned to toy shelves all over the world, including this impressive 18-inch tall action figure. It features over 20 points of articulation, a functioning utility belt with a place to clip on the famous Batarang and an opening front to showcase the Bat-communicator. The return of Batman ’66 is one of the best revivals of Batman merchandising and it showed with this action figure being at the top of toys in 2013.

The mid 1980’s was groundbreaking for DC Comics. The “graphic novel” became prominent, making comics entertaining for an older audience with stories such as Frank Miller’s Batman: The Dark Knight Returns in 1986 and Alan Moore’s Batman: The Killing Joke in 1988, both in their own right are essential reads for any Bats fan. Tim Burton’s 1989 film Batman is historic in many ways as well, from creating the structure of the Hollywood superhero film, bringing the Caped Crusader back to his darker roots from the campy 1960’s in comics and popular media. Most notable was Michael Keaton’s role as the Batman, introducing the character to a modern generation.

Fans in 2014 celebrated the 25th anniversary of Burton’s Batman through this stunning 18-inch tall Michael Keaton featuring 20 points of articulation and items such as the grapple gun, Batarang and utility belt. If you need any Batman to sit at the Bat-computer, Michael Keaton is a top contender in statue form.

The World’s Greatest Detective celebrated the milestone of turning 75-years-old back in 2014 and the special exclusives and Batman action figures kept rolling in well into the following year. Entertainment Earth featured an exclusive showcasing “Rainbow Batmen,” based on the Edmond Hamilton story “The Rainbow Batman,” originally published in Detective Comics (Vol 1) 241 from March of 1957. In the comic, Bats fought crime in different colored Batsuits to distract Gothamites from discovering Robin’s secret identity.

This now classic Silver Age tale is immortalized in the form of popular Funko Pop! Vinyls. The 6-toy series comes in the colors purple, green, blue, yellow, orange and pink.

While you can celebrate Batman Day today by adding to your collection of toys and collectibles showcasing the amazing mythology of the Dark Knight, reading the character’s adventures in comic books, watching him grapple across the big and small screen and becoming the Caped Crusader in video games all showcase your fandom of this pop culture icon.

What are some of your favorite Batman characters? Do you have some of these collectibles? Let us know in the comments!